Oliver unleashes another smart one 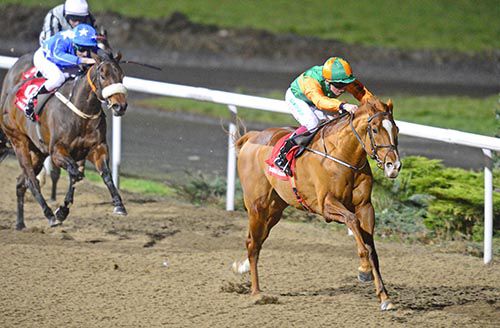 After striking here last Friday night with an impressive newcomer in Tom Melbourne, Andy Oliver was at it again in the Dundalk Stadium – Light Up Your Night Maiden. The market gave the hint, that first-timer, Vitally Important, could be good and so it transpired as he landed the mile contest in style under Chris Hayes.

Hayes ensured Tom Melbourne had an enjoyable first night at the office and here on the well-backed Vitally Important (a four-year-old son of Pivotal) the Limerick man produced his mount with perfect timing.

Supported in from as big as 8/1 this morning into 7/2, Vitally Important was switched out to deliver his challenge from two furlongs out and he quickened to lead in the final furlong.

From there it was easy for the Oliver runner as he went on to score by four and a half lengths from Emiest Rose.

Well-backed joint favourite, Seeking Truth, didn't get the run of the race and he kept on without threatening for the third spot.

"He came to me earlier this year but he had a minor setback and we were under a bit of pressure to try and get him out this year," said Oliver.

"He was hardly more than ready to run and I think he's a smart horse.

Vitally Important is owned by a businessman from Qatar (Mubarak Al Naemi).

The Stewards enquired into an incident early in the straight involving Broderick Falls (USA), ridden by G.F. Carroll, unplaced and Loyalty Card, ridden by C.R. King, unplaced, where it appeared that Loyalty Card was impeded by Broderick Falls (USA). Evidence was heard from the riders concerned. Having viewed the recording of the race and considered the evidence, the Stewards were satisfied that the incident was accidental in nature and took no further action.

The Stewards informed J. L. Hassett, trainer, through his authorised representative that Mystery Again, would have to be recertified before being declared to run from stalls again.

C.P. Hoban, rider of Coinsiasach, trained by Patrick J.Flynn, reported to the Stewards' Secretaries that his mount had a high knee action and did not handle the track.

C.R. King, rider of Loyalty Card trained by Augustine Leahy, reported to the Clerk of Scales that his mount hung in the straight.