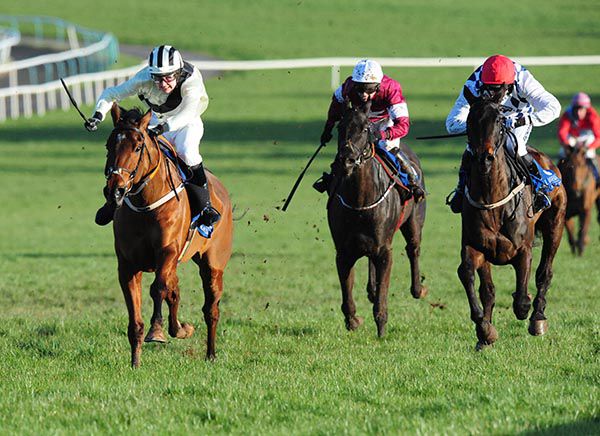 On Eagles Wings (left) winning at Limerick in March
© Photo Healy Racing
It’s all easy after the event, but 3/1 about On Eagles Wings to win the Cork (Pro/Am) INH Flat Race was made to look very generous as the Flemensfirth gelding strode clear in the straight to win by half a dozen lengths.

Mahlers Dollar (3/1) was second with Torygraph (11/2|) another two and a quarter lengths back in third.

The runaway Listowel winner Costalotmore, sent off 13/8 favourite, faded to sixth having led to the straight.

It was a second bumper win for the victorious 6-year-old after winning at Limerick in March, but of course it was his four length second to the albeit heavily-eased Ferny Hollow at Fairyhouse the previous month that made his starting price here look surprisingly rewarding for those who disregarded his market weakness earlier in the day.

Daniel Hyde was on board for his grandfather, absent winning trainer Timmy Hyde, and it was a second winner for the 17-year-old who is a sixth year student at Glenstal Abbey.

Hyde had ridden his first winner, the subsequently sold Keskonrisk, also for his grandfather, at Fairyhouse on New Year’s Day.