Ostatnia does it again at Tipperary 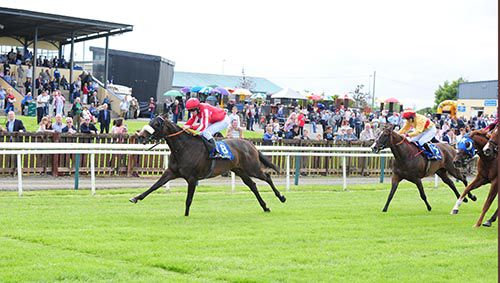 The four-year-old daughter of Amadeus Wolf is now a three time winner over the course and distance, having also won at the venue in May.

She since finished eighth and sixth at the Curragh and Dundalk respectively, and was available at 10/1 last night.

The Stephen McCarthy owned bay opened on-course at 6/1, before going off an 11/2 chance.

Settled behind the leaders by Billy Lee, she took closer order and travelled well from the two furlong pole.

She was ridden to the front inside the final furlong, and kept on well in the closing stages, going on to score by three parts of a length.

Master Speaker finished second under Colm O'Donoghue for Martin Hassett at 4/1, while the well-backed Primo Uomo (16's to 8's on-course) was half a length away in third under Niall McCullagh for Ger O'Leary.

Sors, who was returned the 7/2 favourite, was also well-supported (from 11's last night), and he finished a disappointing sixth under Killian Leonard for Andy Slattery.

McCreery, who was recording his first winner since June 12th, said afterwards: "I was a bit worried coming down when I saw that it was gone to yielding to soft as she is more effective on better ground but she travelled very well today.

"She was drawn 13 of 13 at Dundalk the last day and was asleep leaving the stalls but flew home.

"She has natural speed, is an out-and-out five (furlongs) filly and does fast times with big weights. We might have to travel with her though and we'll look for a Listed race and hope to get black-type before the end of the year."