Patuano brings her homework to Headquarters 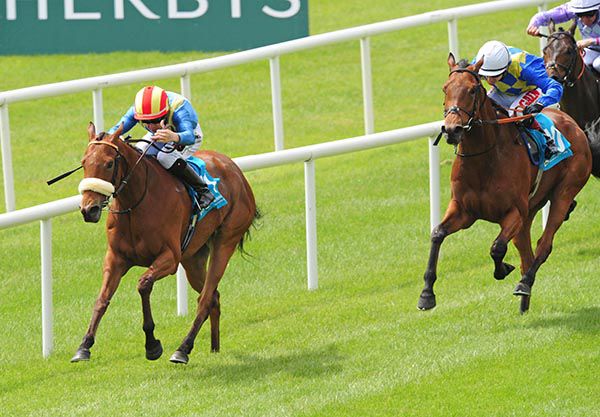 Patuano belied her 14/1 odds with a clear-cut victory in the six-furlong handicap at the Curragh.

Leigh Roche's mount tracked Sors before being nudged along to overtake him over a furlong out.

The four-year-old filly asserted in the final 150 yards to come in by two lengths.

Dali made eye-catching headway to finish well for fourth having missed the kick.

Trainer Willie McCreery said: "That was grand — pity it wasn't a double! [Lethal Promise finished second in the opener].

“She obviously loved that ground. I've been scratching my head with her because she's been working well and ran poor the last day. So I'm just delighted with that.

“I'd nothing really planned because I was actually looking at the race in Listowel next week. She ran well there last year and I thought the bend might suit her. She's as tough as nails and might go there.

“The owner Tom is a brother of Sean Jones. He has a few horses with me and I'm delighted to get another winner for him. He also had a nice filly last week in Cork and is a great supporter of the yard.

“She got into a lovely rhythm. I told him 'wherever you're happy just leave her at that rhythm, if they're going too hard she won't be able to go with them and leave her alone'. He did that in fairness and she was carrying him there.”