Peregrine turned out again quickly at Down Royal 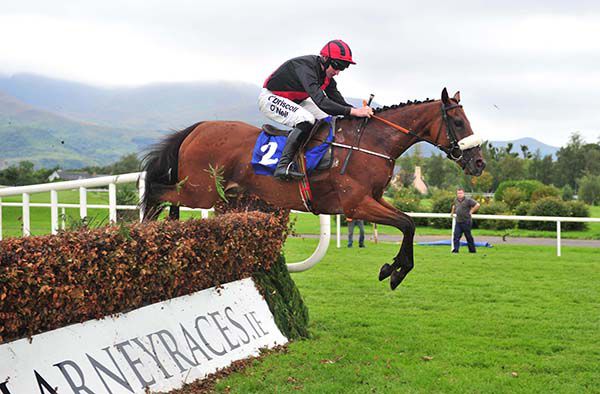 Peregrine Run is turned out again quickly for the feature at Down Royal on Friday, the Irwins Bakeries Hurdle.

The Peter Fahey-trained eight-year-old won the valuable Grade B MSL Cork Mercedes-Benz Handicap Chase at Killarney on Saturday, and reverts to hurdles now for the first time since March of 2017.

The son of King’s Theatre is a Grade Two winner over flights, and looks well-treated by conditions of this race.

Woodland Opera bounced back to form when successful at Kilbeggan earlier this month, and he looks the main danger with Robbie Power aboard.

Dual Grade One winner Road To Riches is an interesting contender, while Canardier and De Plotting Shed (first-time blinkers) are others capable of making their presence felt.

Gordon Elliott trains De Plotting Shed, and he looks to have strong claims in the opening Allied Bakeries 3yo Maiden Hurdle.

He saddles Smiling Eliza and Viscount Wilson here, with the former likely to prove popular with punters after finishing second on her two starts to date over flights.

Elliott also saddles a leading contender in the shape of Anytime Now in the PepsiCo Maiden Hurdle.

Second and third on his most recent starts, the son of Beneficial should be able to make the breakthrough, with Optical Confusion and Colwinston his biggest threats.

The Kerry Foods Handicap Hurdle is a very competitive affair, with Roi De Dubai making a swift return to action after winning at Downpatrick on Monday.

The John McConnell trained six-year-old should give a good account of himself in this two-mile-six-furlong heat, with Ourmanmassini, Coolfighter, and The Major General others for the shortlist here.

Course winner Zagnzig can be expected to go close in the Hovis Handicap Hurdle, while Red Pearl (first-time blinkers), Under Surveillance, and Misty Mountain appear the ones to focus on in the Dale Farm Dromona Mares Maiden Hurdle.

With plenty of winners in the line-up, the concluding Tayto Group Ltd. Mares Flat Race is an interesting affair.

Limerick victor Run For Mary is sure to have plenty of supporters, while course and distance winner Gone Dancin, and the Timmy Hyde-trained Stacey Sue are other leading hopes.