Persistence pays off with Pernickety 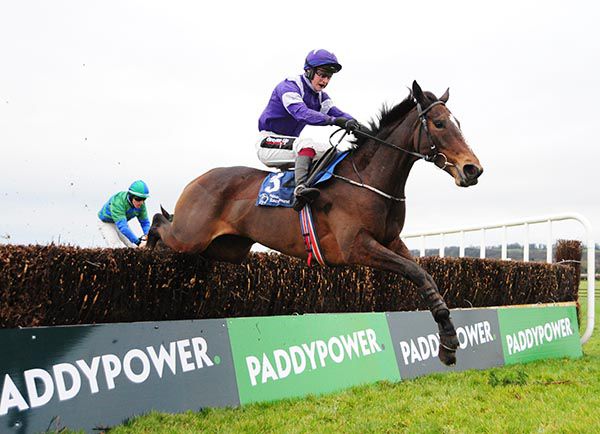 Hotpot Miss Pernickety made heavy weather of things in the opening mares beginners chase but stretched away well in the closing stages to land the odds.

The Joseph O'Brien-trained mare got reminders from JJ Slevin, and flashed her tail, jumping the last with a circuit to run.

She never jumped with any fluency but was produced to challenge going to the second last where the 4/7 shot pecked on landing.

The Jeremy mare led before the final fence and asserted in the closing stages to record a five-and-a-half length win over front-runner New Money.

Miss Pernickety was opening her account having been placed in two bumpers and three maidens hurdles.

The winning rider said afterwards:- “It was hard work for her and she was very laboured the whole way. It’s proper heavy ground and thankfully her ability has got her through.

“She jumped the last five fences well and it’s great to get a win over fences for her as she’s a very well bred mare.”

Bob Olinger is set to bypass next month’s Dublin Racing Festival at Leopardstown.

Sayce Gold has been enjoying a break since putting in a disappointing performance when seeking a four-timer at Thurles last month.