Persse back on a winner after injury 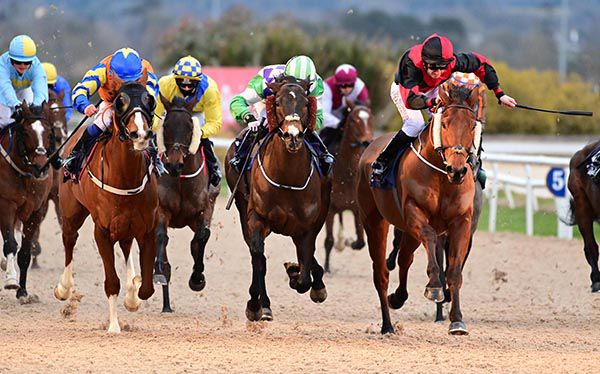 There was an exciting conclusion to the opening DundalkStadium.com Handicap as Lady Of Luxury (12/1) edged out Sand Castle and Macaban City by a nose and half a length.

Trained by Eoin Doyle in Mooncoin, for his wife Gemma Murphy, Lady Of Luxury’s win was a Kilkenny success all round as the Rip Van Winkle mare was ridden by Kells youngster Alan Persse.

“I thought she'd got there. She jumped, got a lovely position, travelled the whole way and she just stays galloping. She's done it well at the end,” said Persse.

“She had a couple of decent runs this winter and she won off 45 last year so she looked to have a big chance coming here.”

Persse dislocated his shoulder at this venue in a fall at the end of November and he added: "Jennifer Pugh, Mr Kenny and John Butler done fantastic work. It’s great to be back now and to get a winner is great.”

M.A. Enright, rider of Maysonlight (GB) trained by Joseph G. Murphy, reported to the Clerk of Scales that his mount hung right throughout.

The Stewards reviewed an incident in the closing stages involving Sand Castle, ridden by C.D. Maxwell, placed second and Lady Of Luxury, ridden by A.C. Persse, placed first, where it appeared that Sand Castle drifted off a true line. Having viewed the recording of the race and considered the matter, the Stewards were satisfied that no further action was warranted.