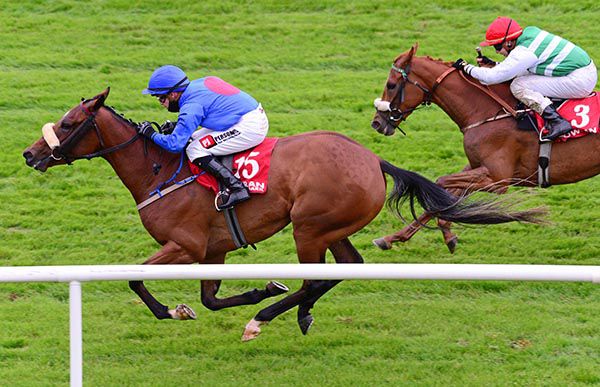 The four-year-old filly showed some promise at Listowel as a juvenile but failed to trouble the judge in three outings last year and trainer Jarlath Fahey admitted she was nearing her last chance after about nine months on the sidelines.

However, she made most of the running here under Leigh Roche and rallied strongly inside the final furlong to get the better of Plum Perfect by three quarters of a length.

Fahey said, “It’s a bit of a surprise and not really. She’s shown us plenty on the gallops at home last year and we decided to give her one more try this year and put cheek pieces on her.

“Leigh gave her a brilliant ride and the cheek pieces have worked. She’s decided to do what she’s capable of doing. She’s owned by my wife (Suzanne) so I’m delighted.

This was the second 100/1 winner in Ireland this year following the victory of the David Dunne-trained Department Of War under Kevin Brouder at Down Royal in January.