Plan comes together for Gibney with Young Paddymc 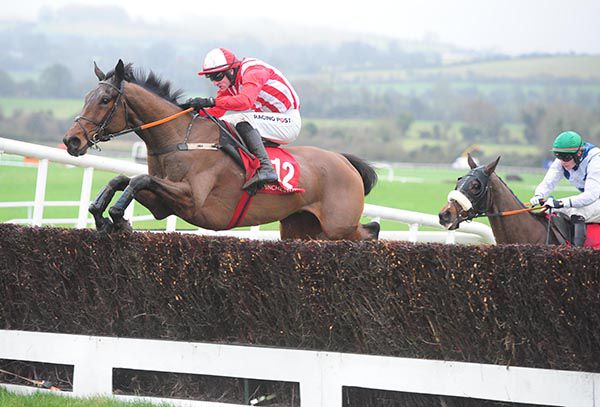 After finishing second at Limerick over Christmas, Young Paddymc managed to go one place better in the opener at Punchestown this afternoon, the 20% Off Festival Tickets Beginners Chase.

Trained by Tom Gibney, the seven-year-old son of Stowaway was successful over flights at Down Royal in March, and was having just his second start over the larger obstacles today.

As short as 7/4 in early shows, he touched 3s on-course before going off the 11/4 favourite under Danny Mullins.

His task was made that bit easier when second favourite Guided By You (9/2 to 7/2) crashed out at the fourth last, bringing down Smithscorner (11/2 to 4s) in the process.

Having raced close to the pace throughout, the winner came to challenge the front-running Carlitos Bay before the last, and he soon got to the front, keeping on well on the run-in to score by seven lengths.

The aforementioned Carlitos Bay (10/1) had to settle for second under David Mullins for Peter Fahey, while 16/1 chance Frankly All Talk was a short head back in third.

"That's great. That was the plan for a while. It's nice that it's worked out," said Gibney, who trains the winner for the Loughkiel Partnership.

"He ran better than I expected last time. Today was the race we really had in mind. Having gone so well the last day I thought we'd be hard to beat today with a bit of luck in running.

"Chasing was always going to be his game as he's a big scopey horse. Who knows where he'll go now, I'm a dreamer!

"There is a bit of significance in his name as his joint-owner Finian Reilly's nephew Paddy died of cancer a couple of year ago.

"We had bought the horse before he died and he had been out to see him and he was named after him.

"The family always come to see him and there is a bit of sentimental value to this fella."