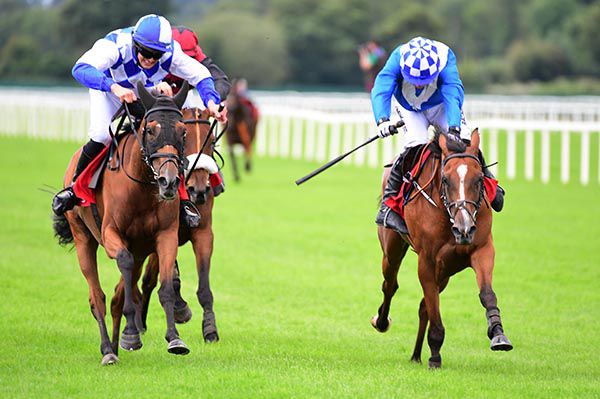 Pour Sioux, right, gets the better of Floating Around
© Photo Healy Racing

The whole complexion of the mares' maiden hurdle in Cork changed when the 11/8 favourite Presenting Meghan unseated at the first flight, and it was Pour Sioux who took full advantage.

Pour Sioux was at the back of the bunch who were at the head of affairs turning for home.

She made headway under Denis O'Regan over the third last and had the leader Port Island in sight jumping the next.

Floating Around was ridden to get the better of front-running Port Island approaching the last with Pour Sioux chasing the pair in third.

It was Pour Sioux who came with a late surge, though, to grab Floating Around close home.

The 16/1 shot got up by half a length while the runner-up went off at 11/2. Loughaneala Og came through for third at 50/1 by a short head from Port Island.

Trainer Hilary McLoughlin's partner Martin Ferris said: "She had a nice run here the last day when Mark Enright gave her a lovely ride, and it was the plan to come back for this race.

"She is owned by a local syndicate to us at Dualla (Co Tipperary) and there are ten lads involved. I told them to have a few quid each-way on her as I thought she'd be there or thereabouts.

"Davy Condon father's Mick owns her and we leased her for a syndicate for a bit of fun and today was the day for her to get her head in front, and whatever happens going forward is a bonus. She also has a mark on the flat so that is an option."