Prickly puts the heat on his rivals 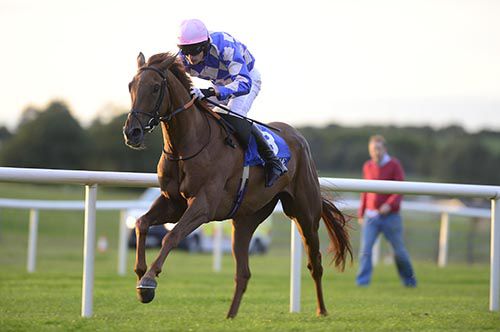 The bumper at Tramore looked a competitive affair and it was newcomer Prickly (7/1) who took the spoils for Edward O’Grady and Kevin Power.

There were some bets landed in the ring on the four-year-old gelding as his backers forced his price down from 10/1 to 7/1.

Prickly had to survive a stewards enquiry as on the home bend he closed the door on Rathmuck Native (5/1) when moving across to the rail. The runner-up had to snatch up briefly, but rallied to finish well in being beaten a length and a quarter. He beat 7/1 chance Behana into third by a short head.

Edward O'Grady said: "He was bought as a foal and I thought he was nice horse but I haven’t had a bumper horse that has run any sort of a good race for quite a while. I was hopefully rather than confident coming here but I do think he is a nice horse with a lot of improvement in him.

"He is only a four-year-old so I will take my time with him. He could be a horse that could improve quite a lot. It was good to win around here first time as it’s a tight track and it takes a bit of doing."

Xpectations, the 2/1 favourite, was off the bridle a long way from home and couldn’t find an extra gear in finishing sixth.

After a lengthy stewards enquiry the result stood.

Willie Mullins had won this race for the last five years, but didn’t have a runner in this renewal.

The Stewards enquired into possible interference coming down the hill and turning into the straight involving Prickly, ridden by Mr K.E. Power, placed first and Rathmuck Native, ridden by Mr M. Fahey, placed second. Evidence was heard from the riders concerned. Having viewed the recording of the race and considered the evidence, the Stewards made no alteration to the judges placings, however they were of the opinion that Mr. Power was in breach of Rule 214, in that he rode carelessly and having considered his record, suspended him for two race days.

Charlie Appleby and William Buick were back in France on Tuesday to win the Prix du Lys with the progressive Volkan Star at ParisLongchamp.