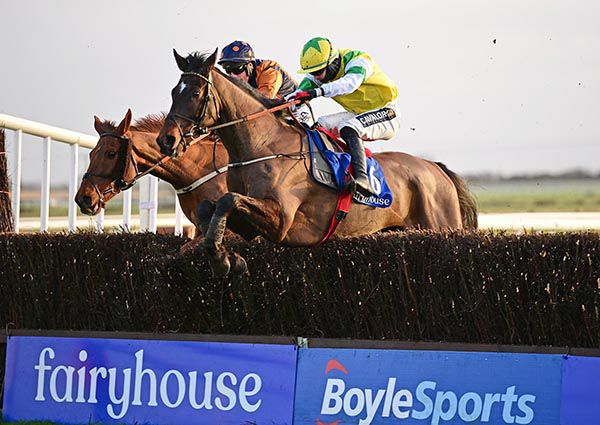 Mullingar handler Ciaran Murphy certainly wasn’t putting anyone off an each-way investment in Enjoy D’allen for last Monday’s BoyleSports Irish Grand National. Those that paid heed to the advice were rewarded with a 40/1 third placing.

The Railway View Stud Partnership-owned Network gelding has taken his exertions well with Murphy revealing: “He’s come out of the race like a star, bucking and squealing. We’re over the moon with the run and we think he’s going to be a lovely horse for next year.”

Looking to the future and the Charlestown Stud operator said: “That has opened up a lot of doors for him.

“We’ll see how he is for the next week before deciding on whether he goes to Punchestown or not. There are a couple of good handicaps that he could run in but he’s done plenty of running so we’ll have to see.

“There is an option of keeping him for Galway and going for the Plate. We’re not sure if he’s that type of horse but we think he’s definitely a National horse for next year so that would be the main aim.”