Raven's Cry swoops to victory for Twomey and Lee 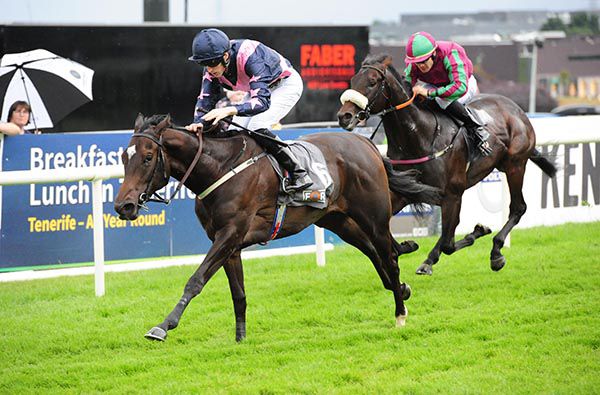 Raven’s Cry (7/2), second on debut at Bellewstown, overcame being drawn widest of all to win the Foran Equine Irish EBF 2-y-o Auction Maiden at Galway for Paddy Twomey and Billy Lee.

It was the jockey’s fourth winner of the Festival, after his hat-trick of wins aboard the remarkable One Cool Poet.

Here, his mount was very sharp out of the gates and was able to get a good early position behind the front-running Natural Power.

Lee sent her for home early in the straight and the daughter of Raven’s Pass ran on to win by a length and three-quarters from Natural Power (12/1), with Helvic Dream (16/1) staying on well into third another length and-a-quarter further back. The 11/4f favourite, Potala Palace, finished seventh of the fourteen runners.

The winning trainer Paddy Twomey (six winners from just 24 runners this season, and Foxtrot Liv and Decrypt both Guineas-placed) said afterwards: “Bellewstown was good for her. Like most of mine she was a bit green the first day and she came forward from that.

“I didn’t think dropping back in trip was going to be an issue but I was worried when I saw the draw in 14. She seemed to overcome it.

“I’d say she’ll step up in grade now. She obviously qualifies for the Final of this Series but she has loftier entries as well.

“She’s always shown me that she is a nice filly and I’d hope she can progress.”