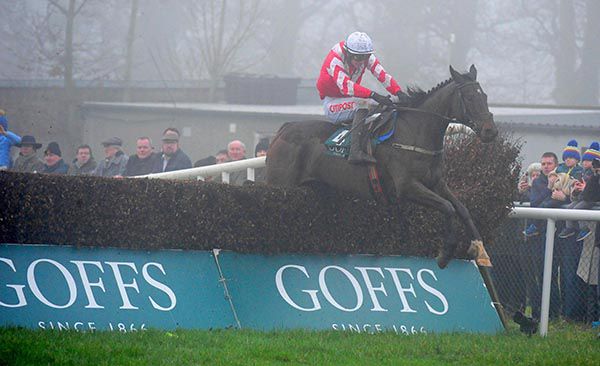 Munster National and Ladbrokes Trophy hero from 2017, Total Recall, added another big race to his haul in today’s Grade A Goffs Thyestes Handicap Chase at Gowran.

An eighth Thyestes win for Willie Mullins, and a first for his nephew Danny, 16/1 chance Total Recall led home a one two for Closutton, beating Class Conti (50s into 33s) by five and a half lengths.

Total Recall got the second last fence wrong but Mullins really had the revs up and he wasn’t going to be denied.

Danny’s cousin David won this in 2017 on Champagne West.

The winning rider said: “I’ve been coming to Gowran since I can remember. I was brought up just across the road from here.

“To win their feature race on the biggest day of the year is fantastic.

“To be part of Willie’s team and to ride such good horses plays a big role in that.

“In Clonmel first time out this year he just maybe took a blow and some of Willie’s horses are improving for their first run.

“He’s a master though, he has them right for these big days and I even had a job pulling him up until I got to the first fence down the back. It’s great to have a willing partner.

“He was maybe a little bit slow away but in the Irish National last year he got a little bit worked up so he’s not one you can rev up too much before you jump off.

“Once I got him away a few good jumps put me in the position I wanted to be. It was plain sailing after that — a good horse.

"We took the outside line as we thought the ground would be a bit better out there. He made a slight mistake at the second last but got away from it very fast which is what you need.”

Willie Mullins said: “It’s a huge day here and it’s like what the Kerry National is to Kerry — this is our National up here!

“I didn’t think he could win another big handicap after winning the Munster National and the Ladbroke at Newbury.

“He’ll stay and stay all day but when you miss the break on him I didn’t think he’d have the gears to get back into the race.”

The Closutton maestro was bringing up a treble on the card after earlier successes for Aione (Rachael Blackmore) and Benie Des Dieux (Paul Townend).

The Irish Horseracing Regulatory Board Veterinary Officer examined Chef Des Obeaux (FR), trained by W.P. Mullins, at the request of the Stewards and reported the animal to be post race normal.

The Irish Horseracing Regulatory Board Veterinary Officer examined Smoking Gun, trained by Joseph Patrick O'Brien, at the request of the Stewards and reported the animal to be post race normal.

R.M. Power, rider of Chef Des Obeaux (FR) trained by W.P. Mullins, reported to the Clerk of Scales that his mount never travelled and was pulled up thereafter.

Tritonic emerged as a leading light for the JCB Triumph Hurdle with a debut success over jumps that will have taught him a great deal and elevate dreams for his owners of landing the juvenile championship at Cheltenham in March.

Roksana returned to the scene of her fine effort in the Long Walk Hurdle to readily outclass her three foes in the Matchbook Betting Podcast Mares’ Hurdle at Ascot.