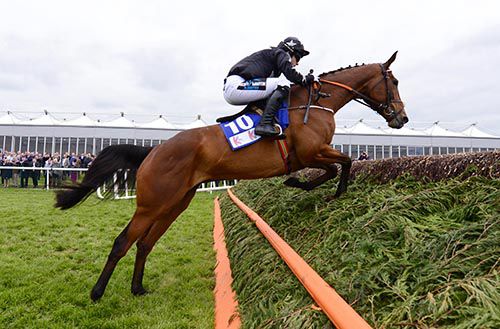 Das Mooser landed a punt when making all for the Bishopscourt Cup over two and a half miles in Punchestown.

Mark Fahey's six-year-old mare was noted halving in price from 10/1 in morning training. This was her first run since landing a point-to-point at Ballingarry in June last year.

Richie Deegan sent her into the lead from flagfall and she jumped well throughout. Shin A Vee, going for four wins in a row in this race, closed in second before the fourth last, though.

However, Das Mooser (5/1) asserted three out and, despite being less than fluent at the penultimate fence, galloped on strongly after the last to win by eight lengths.

Shin A Vee was outgunned and had to settle for runner-up at 5/1. He was a length and a quarter in front of Pass The Ball (4/1).

Enniskillen was backed down to 15/8 favourite to follow up on his victory in the Ladies' Cup on the opening day of the festival.

He raced in rear and was hampered by horses falling at the second and six out. He didn't land a blow today in coming home fifth.

Richie Deegan said: "She has lots of scope now. She was just getting a little bit tired in front and kind of lonely. She was good.

"She travels really well. Mark said she's the kind of mare who just wants to get on with it.

"It was probably a big ask for her coming here and making the running but she was very good."

Mark Fahey added: "After she won her point-to-point she had a few little problems that we ironed out and we’ve had this as the plan for a while. She’s brilliant to jump. She unseated on her first point start but she was just too brave.

“Johnny King would have ridden her but he’s out injured and it was his idea to make it. He deserves plenty of the credit.”