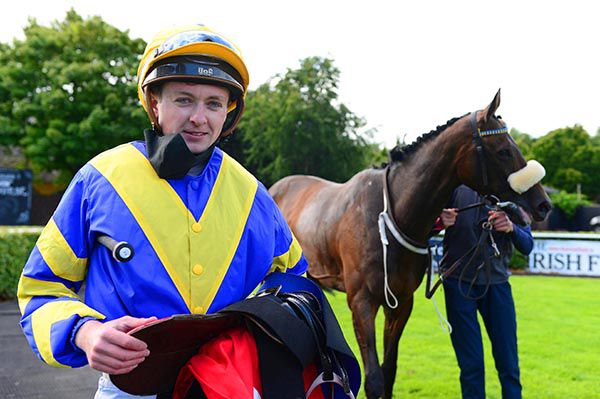 Rayounpour and Adam Farragher after winning the Cork Derby
© Photo Healy Racing
The sole reserve Rayounpour (16/1) got into the valuable Cork Derby and took full advantage as he raced to a length and three quarter victory from stablemate War Diary (4/1 jt fav).

His intended mount at Fairyhouse (Above Us Only Sky in the final race) was taken out this morning and he was handed the ride at Cork on the lightly-raced Aga Khan-bred gelding by his boss Michael Halford.

Placed in three of his five starts in maidens, including last month at Limerick, Rayounpour capitalised on a light weight on his back to win well.

Farragher was unscathed when unseated after the line, and afterwards remarked: “That’s my first big handicap winner and it’s great to get it, especially for the boss-it’s my first winner for him too.

"He did it well and pricked his ears. That was his first run in a handicap and hopefully he can improve for it.

"He didn’t know he had a race. I gave him a pat down the neck and he whipped around down the back!”