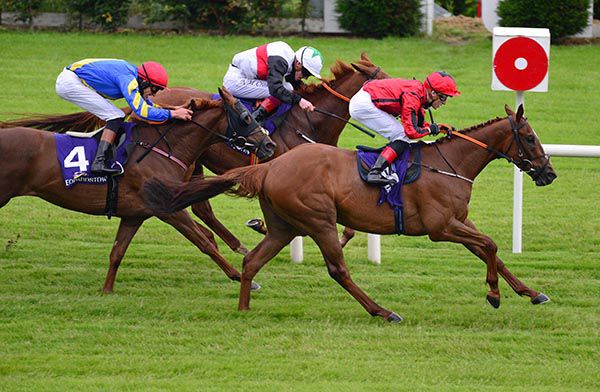 Reverberation completed a hat-trick when coming from virtually last to first in the straight to land the Leopardstown Apprentice Handicap.

Gavin Ryan continues to impress this season and the Jimmy Lambe-trained gelding has proved a good foil for the talented claimer who won aboard the five-year-old in Dundalk back in March and again at Fairyhouse last week.

That latest success meant the son of Excelebration carried a 6lb penalty here but he was still ‘well in’ as the handicapper raised him 12lb in subsequent handicaps.

The 11/4 chance came with a storming run on the outer in the straight to catch the front-running Out On Friday inside the final 100 yards.

Pempie also finished well on the inner to be beaten half-a-length in second, with Cracking Name the same distance further back in third. Out On Friday weakened to finish fourth.

Lambe said, “My hand was forced to run him but he was well. I’d say that’s as far as he can go now as he’s only won by half a length there. We’ll freshen him up now and give him a little break.

“It probably suits him when they go hard and he’s able to pick them up.

“I thought he’d be a little bit better today than he was in Fairyhouse but I was a little bit worried about the mile especially with the ground gone good to yielding.”