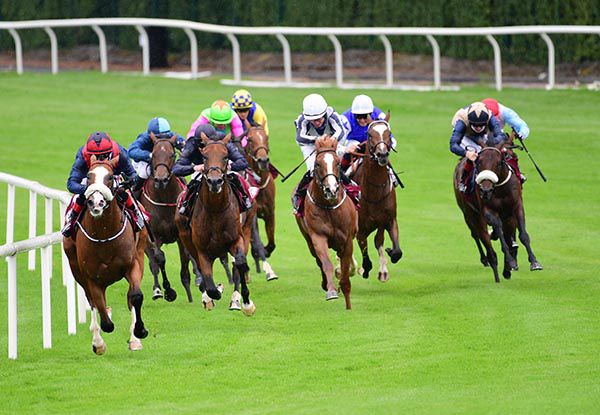 I Am Magic kicks clear into the straight
© Photo Healy Racing

Runner-up on his previous outing at Naas, the Magician colt broke well and Roche was able to dictate the pace without any competition for the lead. He won his race when slipping a few lengths clear coming out of the dip although things got desperate in the final hundred yards as his pursuers closed.

In the end, I Am Magic just held the challenges of market principals Anchorage (5/4 fav) and Duke De Sessa (2/10 by a neck and a head.

The winner, a 95,000 Euro breeze-up purchase, replicated Naas form almost to the pound with the runner-up, having finished a head in front of him on their previous clash earlier this month.

The meeting started on officially yielding ground (from good to yielding in the morning) after some rain before racing.

Winning owner/trainer Michael O’Callaghan said: "It was a lovely performance, he is a nice horse and we thought a lot of him. The plan was to make every post a winning post and he got the fractions right.

"He travelled very strong, has plenty of natural pace and Leigh said he was just getting lonely in front. It is tough to make the running here but we've found it a way of keeping things simple as well.

"We think he'll improve again, will get a mile and we'll step him up to Stakes company now. He has a Futurity Stakes entry but we'll look at a few options in the UK as well.

"I'm delighted with the performance, he isn't a one-dimensional horse (tactics-wise) and Leigh will be delighted to get a winner at his home track."