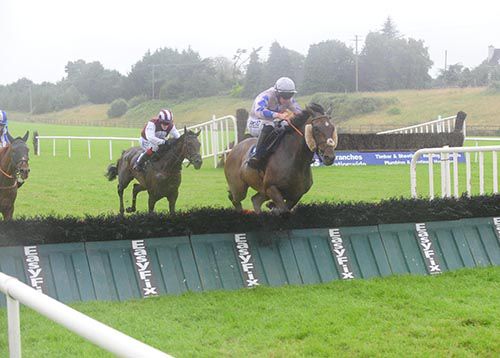 The Co Limerick handler had four winners from 10 runners in July, while two others filled the runner-up spot.

Italian Riviera won at Limerick and he attempts to follow-up in the second divide of the J.F. Hanley Handicap Hurdle.

He faces 16 rivals in this two-and-a-half-mile contest, with Graney Town, By The Banks and Drive The Bus his main opponents.

Tristram Shandy is McNamara's other runner on the card, as he lines up in the Class Grass Handicap Hurdle.

Successful at Tipperary on his last start, the nine-year-old son of Wizard King will bid to record his third career victory in this two-mile-seven-furlong heat.

Other recent winners in the field are Russian Roulette, Herbiegoesbananas, Havana Dancer, and The Rite Article.

Mark Walsh rides Russian Roulette, and he looks to have strong claims aboard Hallmark in the Eurona BriskNet Maiden Hurdle.

Talsara, Echo Lady, Legal Proceedings, and Henry Howard appear the ones to focus on in the Paul Byron Shoes Maiden Hurdle, while Jack Slade should prove hard to beat in the first divide of the J.F. Hanley Handicap Hurdle.

The first three-year-old hurdle of the season gets things underway at 5:40 and 16 have been declared for this two-mile contest.

Dual Flat winner Birthplace represents Joseph O'Brien, and he is sure to have plenty of supporters, while others to consider are Dodgybingo, Trespassed, and Three Majors.

Copernicus came in for plenty of market support when fourth at Killarney recently and he should go close in the concluding Michael Holland Tyres Flat Race.