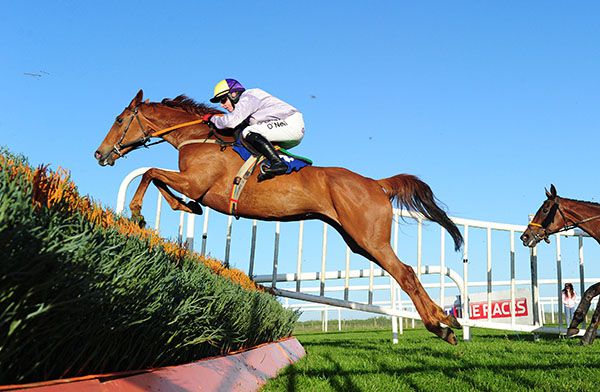 There was a thrilling finish to the myitdeparment.ie Handicap Chase, with Carole Rose just prevailing over Thomond and the front-running Stonehall Jack.

Successful on her penultimate start at Limerick, the Liam Casey trained victor since finished sixth in a valuable Mares Handicap Chase at the Punchestown Festival.

Sent off at 7/1 this evening, she was prominent in the early stages before settling in second. She was third with a circuit to race and blundered at the fifth last.

The victorious daughter of Mahler was ridden in pursuit of the leaders from four out, and gradually reeled them in, getting up close home to prevail by a nose.

The 4/1 favourite Thomond, who also stayed on well, had to settle for second under Sean Flanagan for Noel Meade.

Stonehall Jack (6/1), who lead for much of the contest, was another neck back in third. His rider David Splaine lost his whip at the third last, and it may have proved costly, as they were only caught close home.

Mark Enright said afterwards: "She needed every yard of the trip. They went at it early enough up front, and my one stayed going in the straight. She loves that ground."

* The Turf Club Veterinary Officer examined Motown Bob, trained by Henry de Bromhead, at the request of the Stewards and reported the animal to be blowing hard post race.

* R.C. Colgan, rider of Clontarf trained by Dermot Anthony McLoughlin, reported to the Clerk of Scales that his mount was pulled up as he was feeling the ground. The trainer reported to the Turf Club Veterinary Officer that Clontarf did not go on the ground.

* The Stewards interviewed S.W. Flanagan, rider of Thomond, concerning his use of the whip in the latter stages of this race. Evidence was heard from the rider concerned. Having viewed a recording of the race and considered the evidence the Stewards were of the opinion that S.W. Flanagan was in breach of R10(3)(f) by using his whip with excessive frequency. Having taken his clean previous record into consideration the Stewards cautioned S.W. Flanagan.