Russell and Rathlin a formidable team 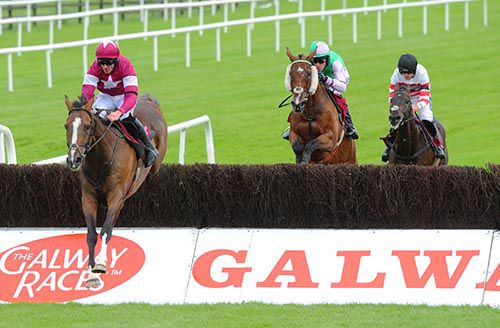 Davy Russell rightly earned much credit for replacing a broken tongue-strap on Rathlin at the start in the Latin Quarter Chase and out on the track the champion jockey gave the Kayf Tara gelding an excellent ride.

English raider Woolcombe Folly was a heavily invested upon 11/8 chance from 5/2 but it was Rathlin and Hidden Cyclone that were the main protagonists for much of the journey.

The now three in a row victor, Rathlin led four out and he was pushed out entering the straight before going on to triumph with the aforementioned Woolcombe Folly beaten a total of seven and three parts of a length in third.

Winning trainer Mouse Morris said: "He did it well. They probably didn't go fast enough early on. He had a look at one or two of the new aprons on the fences but he winged the latter ones and was very good in the dip.

"He could have done with a fence in the straight but Galway is Galway.

"I'd give my right arm to win a Plate owing to family connections to the place so we'll see about that in the future.

"He's doing alright at the minute but much like with women we'll see how things go!

"He trains himself. He had a little break after Punchestown and he'll have another one now."

Davy Russell commented: "He had a good look at the first and came back right on his hocks. That's not like him as he's usually quick and low.

"Jumping is the key to him and we'd imagine he'll stay three miles. I whipped off the elastic band on my wrist at the start and it worked okay as a tongue strap." (TW & EM)