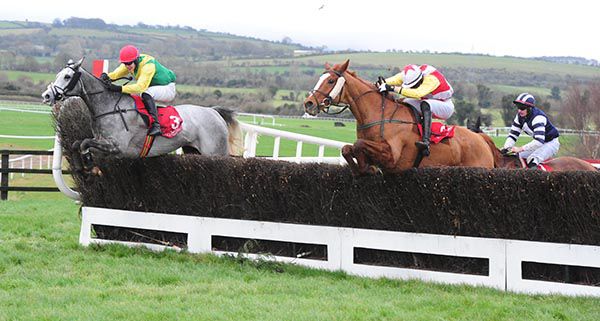 In nine starts last year the son of Golden Tornado finished outside the first three just once, and he has continued that trend into 2019, filling the runner-up berth on his most recent outing at Fairyhouse.

Sent off a 9/2 chance this afternoon, the eight-year-old chestnut raced close to the pace throughout, and was ridden in fourth as they entered the straight.

He soon came with his effort and jumped the last in a share of the lead, keeping on best on the run-in, going on to prevail by two and a quarter lengths.

Whisperinthebreeze (5s into 4/1 joint-favouritism) had to settle for second under Finian Maguire for Jessica Harrington, while Snugsborough Hall, who was the other joint-favourite, was another fourteen lengths back in third.

"He's a super horse. He's running every couple of weeks and is so consistent. He keeps your name up there," said McMahon, who trains the winner for the Coalbrook Racing Syndicate.

"All credit to Eoin, he's given him an unbelievable ride. He's maturing as a rider. He took his time when they got racing a bit early and he came home strongest of all then.

"I'm delighted for him and it's great for the yard. We have only a couple racing, really, and to have a horse so consistent like him makes it easy.

"I was looking at the National Trial back here and 118 got in last year. He won off 115 today so he just might get into that. I'd say that sort of trip will suit him.

"Everything is a bonus now. It's great and I can't say enough about him."

* The Irish Horseracing Regulatory Board Veterinary Officer examined Undressed (FR), trained by W.P. Mullins, at the request of the Stewards and reported the animal to be post race normal.