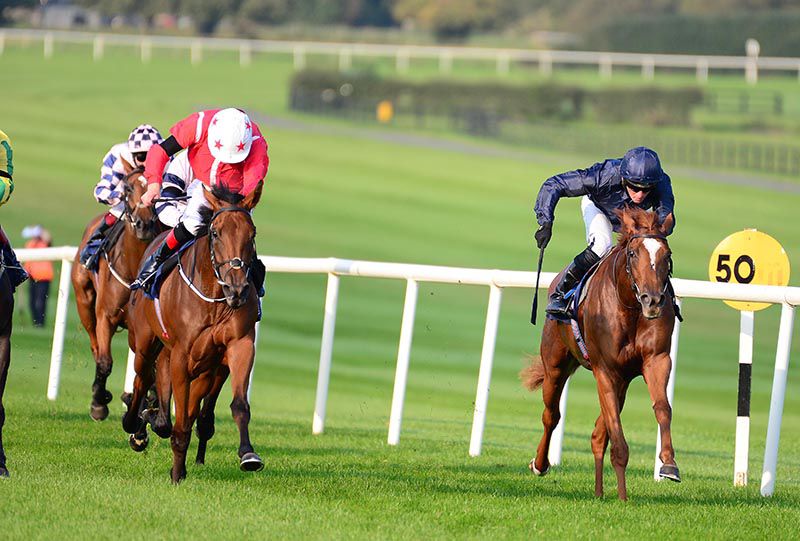 A son of Zoffany, Thunder Moon, gave Joseph O’Brien and Declan McDonogh a day to remember at the Curragh on Sunday in the National Stakes. A daughter of the Coolmore Stud stallion, Sense Of Style, struck for the same trainer and jockey today at Naas in the Irish Stallion Farms EBF (Fillies) Maiden.

On her fourth start Sense Of Style (3/1 second favourite) was equipped with a first-time tongue-strap.

Aidan O’Brien’s Friendly (7/4 favourite) tried to get it done from the front in this seven furlong heat.

However Sense Of Style attacked decisively inside the final furlong to score by a length and a nose from Rosa Woodsii and Friendly.

“She had every right to win on her form. Her last run was a nice run,” said stable representative Brendan Powell.

“The time before was at Dundalk and she had to make her own running that day.

“She's still quite a big weak filly, unfurnished. Hopefully there should be a fair bit of improvement next season. She's got her maiden win.

“Declan said she travelled away well today and when he asked her to pick up she's galloped the whole way to the line.”

The Stewards informed John Joseph Murphy, trainer that Talons Of Steel, would have to be recertified before being declared to run from stalls again.