Sharlanda deservedly off the mark 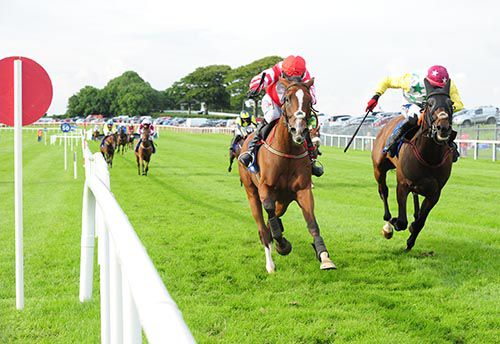 "I got a couple of lengths off the bend which was a help. She needed the line but thankfully it came in time," reported Robbie Power after his mount Sharlanda clung on by half a length from Stormey to land the Tim Kelly Group Handicap Hurdle at Ballinrobe.

Colm Murphy trains Sharlanda, a daughter of Choisir, for Thomas Hughes, and she was shedding her maiden tag here at the fourteenth attempt, between her Flat and National Hunt efforts. Sharlanda and Stormey left Effernock Lad, the third placer, nine lengths behind.

"She was due that as she's been consistent," added Power.

"The ground at Bellewstown was a bit slow for her. Colm said she had improved a good bit from that. The good gallop and the quick ground played to her strengths."

B. Hayes, rider of Leibniz trained by P. Delaney, reported to the Clerk of Scales that his mount lost his action behind and was pulled up.