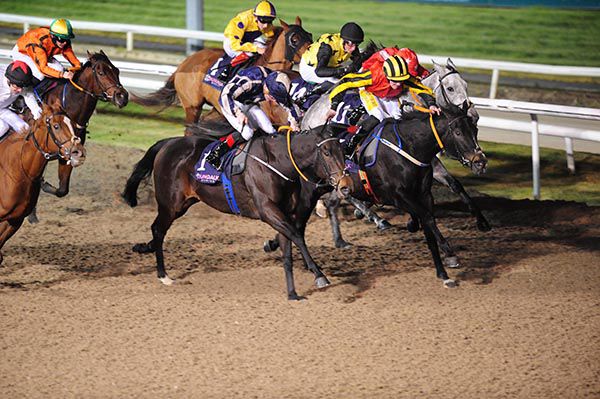 After winning the previous contest with Yuften, Joey Sheridan and Denis Hogan quickly doubled-up in the irishinjuredjockeys.com Handicap, as Lady In Lavender just prevailed.

Successful at Gowran in September, the versatile daughter of Jeremy was third on her most recent start at Naas and was making her debut on the all-weather this evening.

Sent off a 10/1 chance in the colours of owner Conor O'Brien, the five-year-old bay raced in mid-division and was pushed along from early in the straight.

She was ridden and came with her challenge between horses from the furlong pole, getting up in the final strides to prevail by a nose.

Latchet, who won at the venue on Friday, was the one just denied, with this Leanne Breen trained bay returned the 2/1 favourite under Gavin Ryan.

The Donnacha O'Brien ridden Munaajaat kept on well down the outer to take third, another neck back at the odds of 13/2.

"That's my third double of the year. Things are flying and I can't thank Denis enough," said Sheridan.

"When I first got my licence in April I said if I got one winner this year I'd be delighted. To be riding a double here for Denis, I'm delighted and can't thank him enough.

"She was very brave and thankfully I got there in time, I didn't know if I had or not."