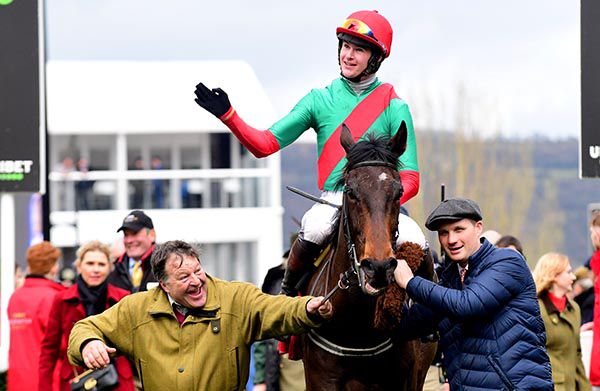 David Bridgwater has next month’s Dave Dawes Silver Cup at Ascot in mind for The Conditional, after he was placed in the Ladbrokes Trophy for the second successive year.

A Cheltenham Festival winner in March, The Conditional was running off a 9lb higher mark on Saturday than 12 months ago but once again ran with great credit — travelling as well as anything for jockey Brendan Powell until the second-last fence when, like everyone, he was left in Cloth Cap’s wake.

Bridgwater has the Grand National in mind for him this season but will not pass up the right opportunity beforehand if he thinks it presents itself.

“It was a good effort — almost a career-best, for the time being anyway,” said Bridgwater.

“He was running against good horses who were hard fit, and we’d just had some minor problems — nothing serious, but things that stopped him cantering for a week, which catches up with you in these races.

“He jumped the ditch, and Brendan just felt him go, and he had he blow, but he kept going. I even thought at the second last we were going to win.”

Bridgwater’s previous flag bearer was The Giant Bolster, who finished in the first four in three Cheltenham Gold Cups under Tom Scudamore — Cloth Cap’s jockey at the weekend.

“Tom gave the winner a great ride — he only had 10st and he sprinted away,” said Bridgwater.

“On good ground, they don’t stop in front.”

“If I’m honest Newbury probably doesn’t play to our strengths, because they don’t come back to you, especially when they are ridden by an assassin like Tom Scu!

“At Cheltenham and the stiffer tracks, it’s harder to do what he did — they don’t get away from you as much and they come back. Ours isn’t ungenuine, but I don’t think we want to hit the front two out or anything like that.

“Look, we’d have loved to have won, of course we would, but to finish third, having been second last year — and it was first time out this year — I thought he’d improved physically and I’m looking forward to his next run now.

“I don’t think we’ll go to Warwick. I don’t think that Classic Chase suited us last year — it didn’t work, so why go back? The only time he’ll go beyond three and a quarter miles is if and when he runs in the Grand National.

“If you’ve got dozens of horses for these races you can pick and choose. But it was the same when we had the Bolster — we took every race as it comes.”