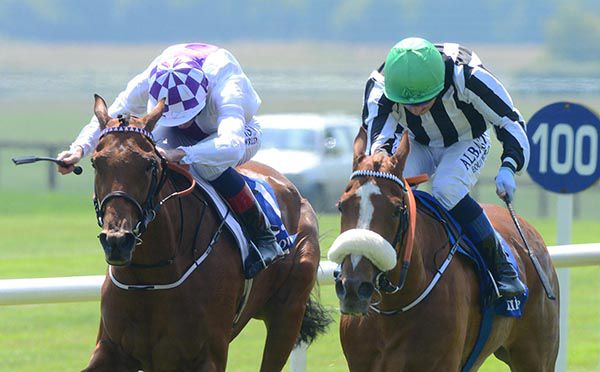 A promising fourth behind Snow on her debut at the Curragh, the daughter of New Approach looked in trouble when 5/4 favourite Astadash went by her over a furlong out, but she rallied gamely to get back up for a half length success.

The winner is a full-sister to 10f Listed winner Glamorous Approach, who also won over 12f, and a half-sister to Poetic Flare who won the first 2-y-o race of the season at Naas back in March.

“She came home well at the Curragh and has improved a little bit from it. She will appreciate stepping up a little bit more in trip,” said winning rider Manning.

“She handles that ground and stuck at it well.

“A mile-and-a-quarter in a stronger run race than that today will be fine but definitely stepping up in trip will bring more improvement.

“She jumped and Rory (Cleary) just couldn't hold his position at the Curragh (on debut). She got a little bit tight and got shuffled back.

“She came home well and I thought with any improvement at all that she'd be right there.

“I thought Kevin’s filly (Astadash) might be hard to beat, which she was.