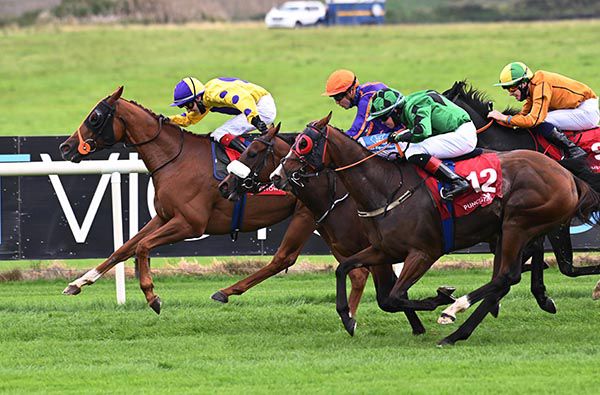 Khafaaq recorded his fifth career success in the Donate To The Coast To The Curragh Cycle In Honour Of Pat Smullen Handicap.

Twice successful in 2019 and 2020, the son of Helmet was placed on his last three starts, finishing third behind Big Island at Tipperary on his most recent outing.

Trained by Andy Slattery and ridden by his son Andrew, the six-year-old was sent off a 14/1 chance in the colours of the Eight Star Syndicate.

Settled behind the leaders, the chestnut victor was pushed along on the outer approaching the straight and was ridden to challenge over a furlong from home.

He edged to the front inside the final 200 yards and just held on to see off the late efforts of Himalayan Beauty (6/1 from 14s early) and Stormy Jenn (25/1) by a head and a head.

Oneiroi was sent off the 4/1 favourite and he finished sixth.

The winning trainer said: "That was well deserved as he's been running well all year.

"We kind of kept him for Galway this year and it didn't work out, one came and chinned us late on.

"We'll go to Listowel now and I suppose he'll have to run in the 80 handicap now.

"He's a great fun horse and that's the fifth race he's won for us now. The lads are having great fun out of him.

"The owners are from Lurgan in County Down and are a great bunch of lads."

The Irish Horseracing Regulatory Board Veterinary Officer examined Oh Purple Reign, trained by Gordon Elliott, at the request of the Stewards and reported the animal to be post race normal.

The Stewards interviewed A.J. Slattery, rider of Khafaaq (GB), concerning his use of the whip in the latter stages of this race. Evidence was heard from the rider concerned. In his evidence, A.J. Slattery stated that he had sent his mount on early in the straight and in a strong finish he had lost count. Having viewed a recording of the race and considered the evidence the Stewards were of the opinion that A.J. Slattery was in breach of R10(3)(g) by using his whip with excessive frequency. Having taken his previous record into consideration, the Stewards suspended A.J. Slattery for one raceday.

B.M. Coen, rider of Double Kodiac trained by Leanne Breen, reported to the Clerk of Scales that his mount stumbled about one hundred yards after the start of this race.