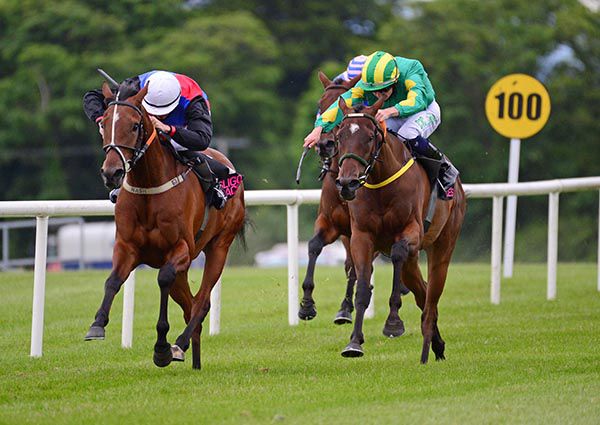 Backed from 100/30 into 9/4 second favourite, Little Brother got the bulk of his opposition in the straight from Jeff Kidder.

Market-leader Jan Wellens was in trouble from a long way out and finished last, whilst up front the Ben Coen-ridden Little Brother got the better of Jeff Kidder by a neck, with the pair four lengths clear of third home, Differentiate.

Doubling up after his earlier win on Talking Tough, Coen said: “James said we know he’ll stay and if you get it in front easy, take it — I popped well and I was getting it easy and he was loving it.

“I got took on a bit down the back straight but he picked up from three out well for me. He was kind of idling a bit the last fifty yards but he stuck his head out for me.

“You’ll probably even see him getting a bit further as well. The trip was no bother. He hit the line well so I don’t see any reason why he wouldn’t get further.”

This was continuing a great couple of days for Coen after he enjoyed his first Group success last night on Know It All at Leopardstown.

R.P. Whelan, rider of Jan Wellens (GB) trained by G.M.Lyons, reported to the Clerk of Scales that his mount never travelled during this race and may have disliked the quick ground and the sharp track.

The Irish Horseracing Regulatory Board Veterinary Officer examined Jan Wellens (GB), trained by G.M.Lyons, at the request of the Stewards and reported the animal to be lame on his right foreleg.

D.J. Mullins, rider of Canford Light trained by Thomas Mullins, reported to the Clerk of Scales that his mount hung badly right during this race.

E. Greatrex, rider of Rock Chica trained by Thomas Mullins, reported to the Clerk of Scales that his mount ran free and then hung right in the straight.