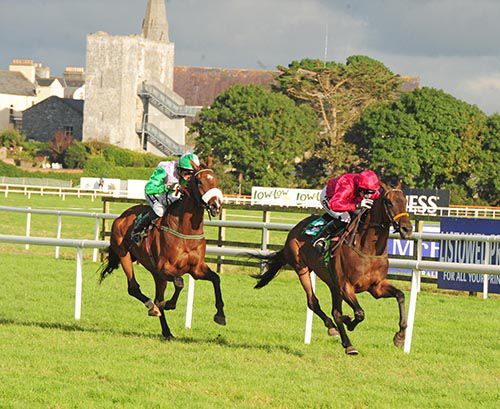 The last race of Listowel's week long Harvest Festival boiled down to a match between the market leaders and it was Snow Falcon who proved strongest at the finish.

The pair drew ahead of the remainder sweeping round the bend straightening for home.

It was Hidden Cyclone who led but Snow Falcon was sent about his business inside the two pole by Nina Carberry and he quickly moved to the front.

He held a lead of half a length approaching the final furlong and, despite edging left across to the rail in the latter stages, increased the advantage to a length and three parts at the line.

"There was not a lot for him over hurdles until the Lismullen Hurdle at Navan in November so I decided to come here and he now has an option of the November Handicap at Leopardstown," trainer Noel Meade said.

"If he doesn't do any more on the Flat this year, next year I wouldn't mind having a bash at that 2m4f Ascot Stakes - he's that type of horse and I don't think he'll ever make a chaser.

"His future this season is over hurdles and he has got stronger. If we could get him to jump a little better - his jumping has just let him down but he seems to have a nice bit of ability."