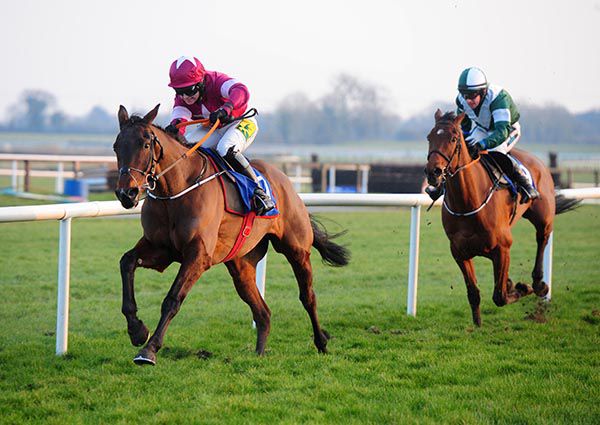 Mitchouka started the day on the right note for Gigginstown and Elliott, under Davy Russell in the Grade 3 juvenile hurdle.

Pointing graduates Sometime Soon (2/1) and Stay Humble (4/6) were expected to dominate in the bumper, as the latter tried to complete a treble for Willie Mullins.

However Patrick Mullins wasn't happy turning in on him, as Sometime Soon still moved well.

There were still a few with chances at that stage though.

Sometime Soon (won at Kirkistown in November for David Christie) edged right towards the rail when sent about his business, but at the line he was a convincing two and a quarter lengths to the good from Buddy Rich.

Thosedaysaregone (12/1) is another nice youngster to look forward to for Charles Byrnes as he finished three parts of a length back in third on debut.

The aforementioned Stay Humble was two and a half lengths behind in fourth.

"He's a nice little horse. He's not a typical Gigginstown horse - a big massive chaser - but we need a few faster ones as well," said Elliott.

"He'll probably go for a winners bumper and I think he won't mind a bit of better ground either.

"He won't be entered for Cheltenham. He's a smart horse and he jumps very well."

The Stewards received a report from the Clerk of the Scales, Mr. W. Fleming, regarding the failure of Mr J. Hogan, rider of The Granson, placed fifth to weigh in after this race.

Evidence was heard from the rider concerned who stated that it was an oversight on his part.

Having considered the evidence, the Stewards were satisfied that Mr. J. Hogan was in breach of Rule 227(i) for failing to weigh in and therefore under Rule 230(ii) they disaqualified The Granson.