Stack & Hayes keep on a roll with Star Of Cashel 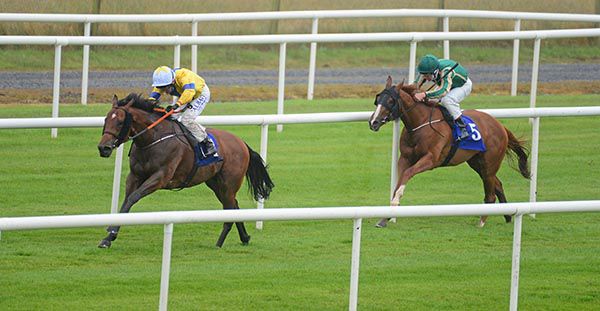 Fozzy Stack enjoyed a superb weekend with doubles at both Naas and Cork, and the master of Thomastown Castle kept up the good run making it six winners in the space of just five days as Star Of Cashel defied top-weight in the www.Roscommonracecourse.ie Handicap.

Star Of Cashel was the first leg of the Naas double on Saturday and he made light of a 6lb penalty for that success appearing to relish the testing conditions here.

Persistent rain turned the going to heavy but that proved no obstacle as the son of No Nay Never justified strong support.

The 11/8 favourite was sent to the front under two furlongs out by Chris Hayes, also in red-hot form having partnered six winners at the weekend including a 965/1 four-timer at Cork, and got well on top in the closing stages.

The gap was six lengths back to Kosman in second at the line, with Vormir a further length and a quarter away in third.

Hayes said, “He’s a grand horse and has done it well. It was a good bit of placing by Fozzy as he got 7lb so he was 1lb well-in.

“He handled conditions well and is a very genuine and clear-winded horse. He normally only does enough but I think he’s improving with racing.

“Fozzy’s horses are running well and hopefully we can keep it going.”