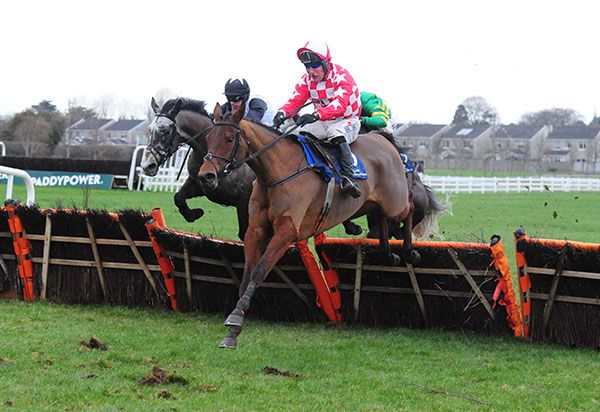 Jessica Harrington completed a quick double at Naas this afternoon when Port Stanley led home stable-mate Lynwood Gold in the maiden hurdle on the card.

Port Stanley was driven up to challenge two from home and soon gained a narrow lead over Pure Genius.

Lynwood Gold stayed on to press his stable-mate at the final flight but Robbie Power got a good tune from the 5/2 shot on the run-in to record a half length success.

Port Stanley, a former point-to-point winner, was gaining a deserved success having been placed in two bumpers and three maiden hurdles.

Harrington said:- “He’s been very consistent and Robert said he was a lot more professional today. He jumped quicker and he knew what he was doing.

“It was really through greenness that he threw the race away in Down Royal. Today he put his head down and galloped.

“He’ll go on anything up to yielding but once it dries up too much he probably won’t run. He can go for a novice and has plenty of experience now.

“He’ll go two and a half miles on better ground.

“I’m delighted with Lynwood Gold and hopefully he can win his maiden hurdle now. He’s a nice horse and will go back on the Flat as well.”