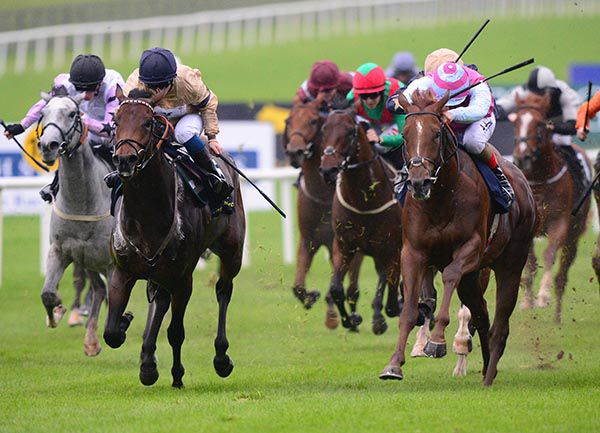 For the fourth year in a row the valuable Tattersalls Ireland Super Auction Sale Stakes went for export to Britain - this time with Michael Bell's Stone Circle.

The No Nay Never colt had to overcome top weight of 9st 5lb in this 26-runner cavalry charge and did so by a head at 12/1.

He came home strongly down the centre of the track, under Andrea Atzeni, to collar Maystar in the final strides.

British trainers saddled the first three home as Maystar took second for Archie Watson at 14/1. Hugo Palmer's Hamish Macbeth was a neck away in third at 9/4 (from 7/2) in a driving finish.

Andrea Atzeni said: "Michael liked him a lot before the race. I had never ridden him before and he said he is very straightforward.

"He actually ran really well (when fourth) in Goodwood - I'm not saying he was unlucky but it was just one of those races around there.

"He travelled quite nicely and to be fair to him he had to stick his head out all the way to the line which he did. It was a great effort."

Michael Bell said: “Last year Alex Elliott and my son Nick bought Master Brewer who won the Sales race at Longchamp, and they went to war and bought this horse at Fairyhouse.

“It was a good performance giving weight all round and he’s a smashing little horse by a very good stallion.

“It’s very sad as Bob Michaelson was involved and it was his funeral this week. He’d a quarter share in him, and is looking down.”