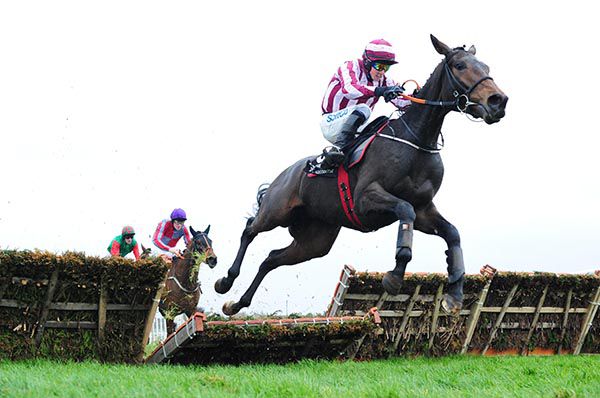 Coeur Sublime made the perfect start to his hurdling career, as he took the opener at Down Royal, the Value Cabs 3yo Hurdle.

A winner on debut on the level at Navan in April, he beat Southern France there who since finished third in the St Leger at Doncaster.

Then trained by Peter Fahey and owned by Tim O'Driscoll, he since changed hands for E260,000.

Now in the care of Gordon Elliott, and owned by Chris Jones, the son of Elusive Pimpernel was expected to deliver this afternoon, going off the 8/11 favourite.

Settled behind the leaders by Bryan Cooper, the bay gelding didn't jump fluently at times, but came with his challenge on the outer approaching the second last.

He got to the front shortly after that flight, and despite a sloppy jump at the last, he kept on well under pressure to prevail by a length and a half.

The front-running Our Legend (7/1) plugged on to take second under David Mullins for his father Tom, while Future Proof (15/2) was another length and three parts back in third, with Sean Flanagan aboard this one for Noel Meade.

Elliott said afterwards: "We think he is a nice horse. He'll come on a tonne from the run, you could see he was behind the bridle the whole way and kept picking up. We think he could be okay. He hasn't been on grass at all.

"He'll go on anything if its not the two extremes - bottomless heavy or too quick. Bryan (Cooper) says it is beautiful ground there.

"You can't stress enough that this is the first time the horses are getting on grass so I thought it was a good performance.

"Fairyhouse looks the obvious place to go with him.

"Chris (Jones) deserves every bit of luck he gets as he invests a lot into the game. He's a big owner."

On Samcro, Elliott said: "I'm disappointed he didn't win but happy the horse is in one piece this morning."

When asked about fences, he replied: "No, no, we will stick the way we are going."

Cooper added: "You wouldn't buy what he learned there today. He got a lovely lead and it was only his second time on the track. A lot of the others had plenty of experience.

"He had a good look at the last but you'd like that. I think there is a big engine there and when everything comes together he could be a lovely horse.

"He jumped very well for a first time out. He got in underneath the third last a bit but as soon as I gave him a squeeze he latched back on to the bridle again.

"It's on the slow side of good out there.

"I don't know (if this is a new arrangement with Chris Jones), I'll take every ride that I can. My agent Ciaran O'Toole told me I was riding this lad and I just can't thank Chris Jones enough for giving me the opportunity to get on these horses. Hopefully we can continue going the way we are going."