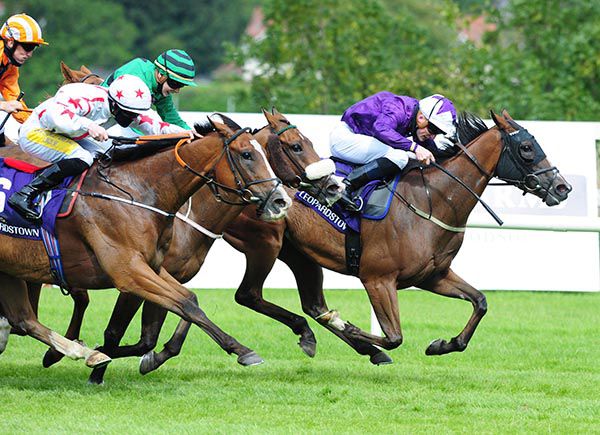 On his last day claiming five, the star apprentice had earlier recorded his first Group race success aboard Shale in the opening Silver Flash Stakes, while he also registered a brace at Naas on Monday.

Beaten by just a head here last month, Sweet Affection was sent off an 11/2 chance this afternoon and she raced behind the leaders on the inner.

Pushed along to challenge from the two furlong pole, she was ridden to the front inside the final 150 yards, keeping on well from there to hold off the late surge of Guido Reni by a short head.

The runner-up was also returned at 11/2 under Joey Sheridan for Karl Thornton, while Spelga (25/1) and Caronda (18/1) were third and fourth respectively.

Full Moon Magic, who was returned the 9/4 favourite, had no luck in running and she eventually finished seventh.

Winning trainer Dermot Weld said afterwards: "She deserved that as she just got beaten here the last day. She's a very genuine filly and I'm delighted for her owner/breeder Joe Higgins who always breeds a good horse.

"Despite the fact that she's by Exceed And Excel, she gets every yard of the mile and five and maybe another furlong may not be astray. Hopefully she can win another one of those.

"Gavin has ridden three winners for me in the last ten days. Today is his last day claiming five."

* The Stewards enquired into possible interference near the finish involving Spelga (GB), ridden by R.P. Whelan, placed third, Sweet Affection, ridden by G.M. Ryan, placed first and Thefaithfulindian, ridden by W.J. Lee, placed fifth, where it appeared that Thefaithfulindian ran short of room and checked. Evidence was heard from the riders concerned. Having viewed the recording of the race and considered the evidence, the Stewards made no alteration to the Judges placings. In reaching their decision they were satisfied that any interference caused was accidental in nature and took no further action.

* S.M. Crosse, rider of Full Moon Magic trained by Joseph Patrick O'Brien, reported to the Clerk of Scales that his mount was badly checked two furlongs out and got no run. Having received this report, the Stewards reviewed the video with S.M. Crosse and concluded that no further action was warranted.

* R.P. Whelan, rider of Spelga (GB) trained by M.Halford, reported to the Clerk of Scales that his mount lugged left in the straight.

* G.P. Brouder, rider of Tenth Amendment trained by Keith Henry Clarke, reported to the Clerk of Scales that his mount leaned to the left throughout this race.

* W.J. Lee, rider of Thefaithfulindian trained by Aidan Anthony Howard, reported to the Clerk of Scales that his mount ran short of room going to the finish.

Fiscal Rules the roost in Cork

Scholastic gained a deserved success over jumps when running out a convincing winner of the EMS Copiers 3-Y-O Maiden Hurdle at Punchestown.