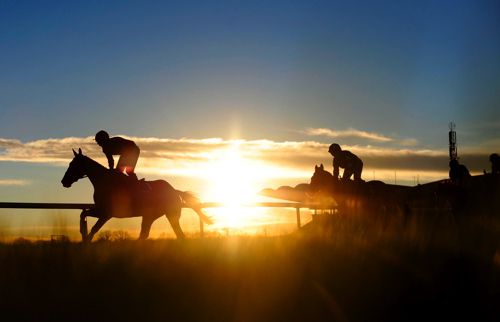 The performance of Tango Theatre (suspended from running for 60 days) at Fairyhouse today in the Bar One Racing Supporting Irish Injured Jockeys Maiden Hurdle landed connections in hot water.

The Steward's report is detailed below.

The Stewards enquired into the running and riding of Tango Theatre, ridden by C.D. Walsh, and trained by John C. McConnell.

Evidence was heard from the rider and the authorised representative for the trainer concerned.

C.D. Walsh, stated that his instructions were to drop his mount in and get her to finish. However, he stated that he had left his mount with too much to do and had let the leaders get too far ahead of him.

Furthermore, he added that he probably should have been harder on his mount.

Martin Fox, Authorised representative, confirmed the instructions given and said he was delighted with the horse.

He added that the horses in front had stayed on strongly and that they had gotten first run on his charge and he felt that the rider will only improve with experience.

The Stewards also received a report from the Irish Horseracing Regulatory Board Veterinary Officer who stated that Tango Theatre was post race normal.

Having viewed the recording of the race and considered the evidence, the Stewards were satisfied that John C. McConnell and C. D. Walsh were in breach of Rule 212A (ii).

Having taken both persons previous record into consideration, the Stewards fined John C. McConnell €3,000, suspended Tango Theatre from running for 60 days and suspended C. D. Walsh for 21 days with his riding fee to be forfeited.

Michael Winters is still targeting the Cheltenham Festival with Chatham Street Lad, despite his defeat at Fairyhouse.