Tarnawa shines in second Give Thanks triumph 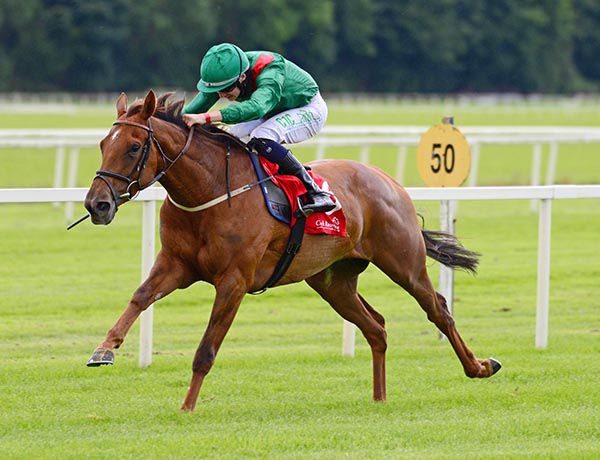 The featured Irish Stallion Farms EBF Give Thanks Stakes (Group 3) was won for the second time by Tarnawa (8/1, from 9/2 in the morning) ridden by Oisin Orr.

Early in the home straight Shane Foley looked to have plenty of horse left on 11/10 favourite and Irish Oaks runner-up Cayenne Pepper, but as he bided his time before committing his mount, Tarnawa swept down the outside to hit the front.

The daughter of Shamardal, unpenalised for her win in last year’s Group 2 Blandford Stakes on Irish Champions Weekend, galloped on for a length and three quarters victory over the market leader, with Irish Oaks third Passion filling the same position.

It was a fine reappearance from Tarnawa, defying her weakness in the betting to give Dermot Weld a seventh win in this particular race and completing a 57/1 first and last race double for the trainer and Oisin Orr.

"She was impressive in this race last year and she was equally impressive today. She has strengthened from three to four and is just a good filly.

"The plan was always to start back today, she has a multitude of entries for the autumn but we said we'd come here and then play it by ear.

"She had possibly gone over the top by Ascot's Champions Day last year but the plan was always to start here today for an autumn campaign."