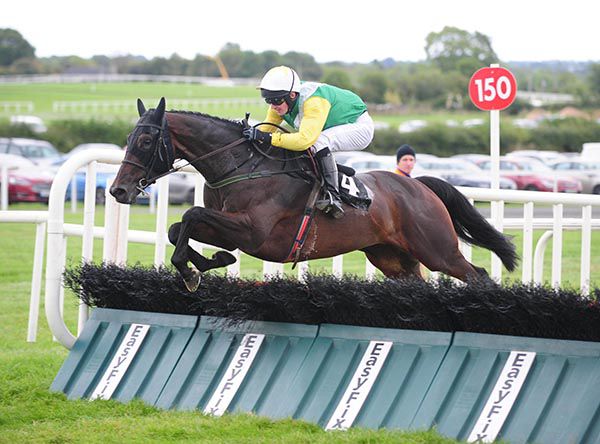 Kildorrery
© Photo Healy Racing
Ted Walsh has more love for the town of Kildorrery than the horse of the same name he trains, but Kildorrery today managed a second career win in the Pat Doyle Memorial Maiden Hurdle at Kilbeggan, when providing Michael Stenson with a first winner as a professional jockey.

Seven pounds claimer Stenson held Kildorrery up in rear and produced the five year old to lead after the second last and in the end the pair beat Archer's Up by three and three parts of a length.

Walsh described the son of Arakan as “daft” following his previous win in a bumper at Tramore last December and today added “his mother was as mad as a hatter and so is he; she was a tearaway but won a couple of races.

“Michael gave him a grand ride. He’s ridden a few point-to-point winners for us and he should ride plenty of winners as a professional.”

The Grand National winning trainer added “it took two of us to lead him around the ring and he’s hard on himself. If he settles he could win plenty of races.

“He is a half-brother to Old Castletown who has won five races and the owner Denise Entenmann lives in America and married a cousin of mine (Thomas Walsh); she has a summer house in Kildorrery.”

The Walsh family connection to Kildorrery goes back to Ted Walsh's father Ruby, who was born and reared in the north Co Cork town, and Walsh's Papilllon was paraded through the town in 2000 following his Aintree Grand National heroics.