The Caddy Rose back to form under Walsh 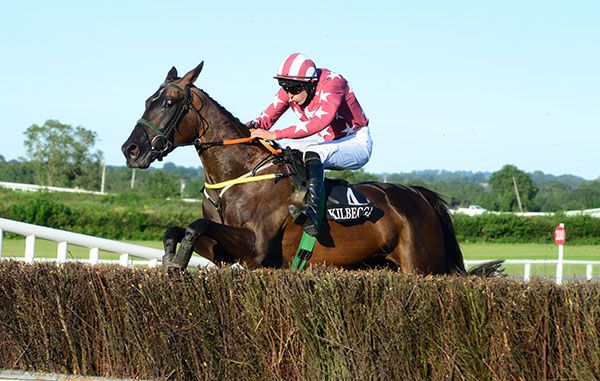 The Follow @KilbegganRaces On Instagram Handicap Chase produced a good finish with Eoin Walsh’s 7lbs claim proving very valuable as his mount The Caddy Rose (11/4, from 6/1 this morning) found a bit extra close home to repel the challenge of topweight Ask Nile by a neck.

The complexion of the race changed when bottomweight Crazywork De Vassy came down two out when five lengths up and travelling well.

The eventual winner was left in front from that point but was joined by Ask Nile on the run-in before asserting close home. The runner-up was a bit unfortunate to be hampered by the faller at the second last.

It was a fourth career win for the Noel Meade-trained mare who had won on chasing debut last year at Navan and had come down a few pounds in the ratings in addition to Walsh’s allowance (his sixth winner of the season).

“She was tough after the last and battled well, said Walsh.

"The step down in class today probably helped too. She’s off a nice mark and she’ll improve again.

“The faller at the second last probably left me in front a bit sooner than I wanted. She idled a bit in front and was having a look around but she is game.”