The Storyteller adds another chapter to his tale 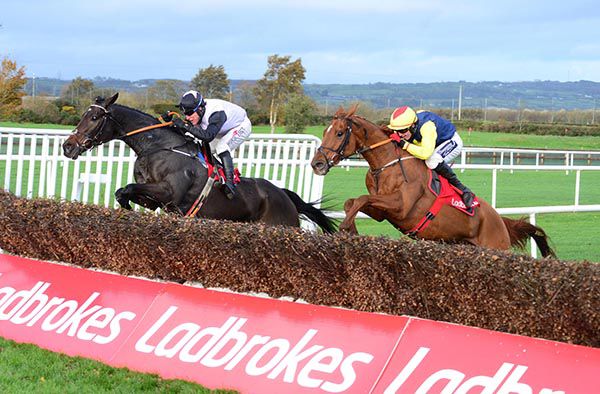 There was a thrilling conclusion to the feature at Down Royal this afternoon, the Ladbrokes Champion Chase, with The Storyteller just getting the better of Chris's Dream.

Kept busy in recent months, the Gordon Elliott trained victor had race fitness on his side and was settled towards rear by Keith Donoghue in this Grade 1 contest.

He took closer order from three out and was soon pushed along on the outer, improving into a share of the lead at the next.

He jumped the last alongside Chris's Dream and after a ding-dong battle up the run-in, just a neck separated them at the line.

The winner was returned a 9/2 chance (15/2 in early shows) in the colours of local owners Joe and Pat Sloan, while the runner-up was the 5/2 favourite under Robbie Power for Henry de Bromhead.

Tout Est Permis (8/1) was another four and a half lengths back in third, while Presenting Percy, on his first start for Elliott, was another length and a quarter away in fourth.

Elliott, who was recording a treble on the day, said in the aftermath: "The ground not going too deep suited him. He's a horse of a lifetime and has always been a brilliant horse for the Sloans.

"He might get a bit of a break, he wouldn't want real heavy ground.

"They'll all go to the usual places over Christmas.

"It's great for Keith, he's a big part of our team. He's had loads of chances and he proves when he gets the chances how good he is.

“Denis (O’Regan) was happy with him (Presenting Percy) and said he blew up. The ground just wasn’t as soft as he would have wanted.

"Jack was happy with him (Delta Work) but he just got tired. The rest of them finished where they should."

Paddy Power go 40/1 about the winner for the Gold Cup at Cheltenham in March.