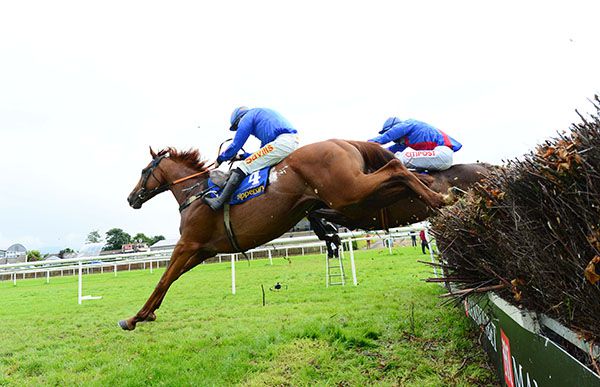 The Trigger
© Photo Healy Racing
Ronan McNally harbours dreams of a trip to Aintree with The Trigger following the remarkable veteran's latest triumph at Downpatrick.

Based in Armagh in Northern Ireland, McNally divides his time between selling kitchens and training a small string of racehorses that does not even reach double figures.

However, over the past 12 to 18 months he has proved himself more than capable of doing the job - first through the exploits of The Jam Man and See Double You, who became the oldest winner in Ireland in 32 years at the age of 16 last July, and now with The Trigger, who has won five races on the spin in little over a month.

"It's a family-run hobby for us, more than anything," said McNally.

"I've been training for seven or eight years and for the first four or five years I just trained maybe one horse.

"I have a kitchen business as well, so it's a bit of a juggling act between the two. Now we have up to eight horses in and the phone hasn't stopped over the last month or two, asking if we'd take horses, but I haven't taken any.

"I would take the right horse, but I don't want to fill the yard with rubbish. We try to spend the time with every horse and get the best out of them. We don't want to get too big and lose sight of what we're doing.

"We're still busy with the kitchen business as well. My main aim for the racing is to get a horse from JP McManus. Hopefully one of these days we might get the phone call!"

The Trigger has never been devoid of ability, but even his trainer admits he was beginning to lose the faith after a two-year winless spell until the spring of this year.

He said: "I nearly sold him when Covid-19 started to come in. I asked a few friends if they wanted to buy him to go point-to-pointing because he's so good to jump and travel and ride - he would do a job for anybody.

"No one seemed interested in him, so I'm very lucky."

McNally credits The Trigger's incredible transformation to a change of routine, with the trainer adopting a less is more approach since the 11-year-old returned from a three-month break at the start of July.

"When I first bought him he was very sick and weak. It took us a long time to build him up and get his coat right when we were running him, he was bleeding - even on some of the days he won for us he'd bleed in the box on the way home," said McNally.

"It's taken us a long time to get him to a place where he doesn't seem to be bleeding. He carries a lot of weight as he loves eating and we were always trying to work the weight off him, but I came to the conclusion he was better running fresh.

"It was just about having the confidence in ourselves to do it, but we've done it this summer after a break and now that he's got his head in front he's bouncing around the place.

"We've done a bit of hunting and done a bit of cross-country and taken him to the beach - we're basically just taking him for days out rather than training him any more."

A big part of the McNally team is his 10-year-old son Kian, or 'Tubbs' as he is affectionately known.

McNally junior made several television appearances during The Jam Man's rise through the ranks last season - and has played a leading role in The Trigger's recent resurgence.

"Tubbs is a bit of a celebrity here and Covid-19 has actually been a blessing in disguise for him because he's been off school and has been riding out every morning with me," said McNally senior.

"The wee fella rides Trigger at home. He's just turned 10, but he can ride everything in the yard and he schools Trigger over hurdles, which Trigger loves, because he probably feels like he's no-one on his back!"

The Trigger's winning sequence began with narrow victory over fences at Tipperary on July 1, since when he has completed a hat-trick over hurdles before successfully reverting the larger obstacles at Downpatrick.

While McNally feels the big difference in the Beneficial gelding has been largely mental, he has noticed one bizarre physical change.

He said: "It's a bit strange, but until maybe the last two months, he had no hair on his face. We've put coconut oil and baby oil on his face, to try to get the hair to grow, but it never did.

"Now he has a full chestnut face and while I can't really explain it, I would say that has to be something to do with his health - something in his body is obviously working better than it was before.

"He was as fat as a bullock the day he won in Tipperary and he's even fatter now! People are probably thinking he's had a hard schedule, but in between his races he's having four or five days off, then he might go into a lunge pen for a day and then he'll have two light canters two days before he runs.

"He was actually heavier for his last win than he's been for any of his wins, so that just tells you that he's thriving. He's jumping out of his paddock into another horse's paddock to eat their food and things like that - he just feels on top of the world."

The Trigger is likely to be in action again soon, with his trainer keen to find him the best possible opportunity to complete what he has been told would be an historic six-timer.

"Plenty of horses have won six in a row in novices and graded races and things like that, but someone was telling me the other day he'd equalled the record in Ireland for the number of consecutive wins in handicaps over jumps, so I'd love to break it," said McNally.

"There's nothing really obvious that will suit him brilliantly and I'll be picking his next race carefully."

On the longer-term ambitions of a potential spin over the famous fences at Aintree, he added: "He's up 118 over fences now, so another win would take him to the mid-120s. Then you might be able to look at one of the races over the National fences - that would be the dream.

"I'm not saying the Grand National as I think you need to be rated 140 plus just to get in, but it would be great to think he might be able to run in a Becher Chase or something like that."