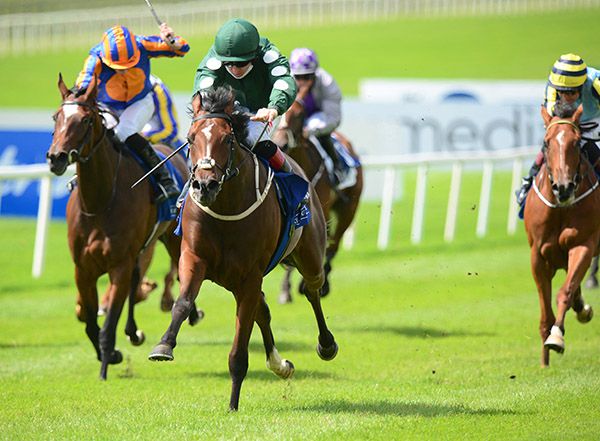 Second on debut at Leopardstown last month, the daughter of Camelot was expected to go a place better this afternoon and went off the clear 8/13 favourite in the colours of owner Mark Dobbin.

After breaking smartly, the bay victor was settled behind the leaders in third. She was ridden in the centre of the track from the two furlong pole and soon improved to lead, keeping on strongly inside the final furlong, coming home four-and-a-half lengths to the good under Colin Keane.

History finished second under Ryan Moore for Aidan O'Brien at 9/2, while the saddle slipped on Livia Celeste (10s early, returned 9/2) who ran well to finish third, another two-and-a-quarter lengths away.

Shane Lyons, assistant trainer, said: "Obviously she had experience over a lot of her rivals but Ger doesn't want to over-race her this year. It's all about next year and she has been telling us that she is crying out for a run.

"She got away with that ground. She obviously wants further but definitely wants next year. We won't be rushing her back and that's why she has no early closing race entries.

"If she tells us we will supplement her for the autumn. She will run again but it's all about next year and we'll let her grow into herself.

"From the word go she's telling us she's sharper, being what she's by, than what she's meant to be."