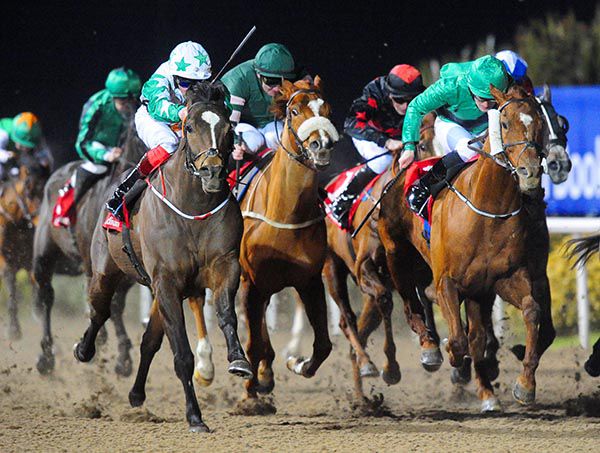 Master Speaker won his first race since May 2015 when scoring on his initial attempt for Ado McGuinness in the Fast Shipping Ltd Handicap at Dundalk.

McGuinness and Robbie Downey (first time aboard the eight-year-old) are entitled to feel well pleased with themselves as Master Speaker hasn't been easy to win with.

However he brought his score to three from fifty seven here, coming home strongly after getting into the clear.

On trainer number four now, Master Speaker defeated Bien Chase (16s into 8s) and Plough Boy (14s into 9s) by three parts of a length and half a length.

There was another three parts of a length back to favourite, Silk Cravat, in fourth.

An 11,000 Euro buy back in October, McGuinness explained on Master Speaker: "We bought him in Goffs at the horses in training sale and I just thought that he has loads of ability and we might be able to sweeten him up with our way.

"I knew he was well handicapped and we've done very little with him.

"We brought him here last Tuesday for his first piece of work and he worked very well behind Togoville. We said we'd give him a run tonight and see what happens.

"Robbie gave him a peach of a ride. I think he needs to be held up and come with one run. A fast pace suits.

"I don't know whether we'll go again here or wait for the first day of the season on the grass, the six furlong race that we've won a few times with Bubbly Bellini.

"We could come back here though if there is a good pot here. We'll see what the handicapper does to him.

"I think we'll have a lot of fun with him. Stephen Thorne has set up a new syndicate and we only finished selling the shares last Saturday. They've got a quick return on it.

"Stephen set up Shamrock Thoroughbreds and Rosenborg Rider is in it as well. He's done a good job. He's an ex Flying Start student and he's my assistant."

S. Foley, rider of Burn The Boats trained by John James Feane, reported to the Clerk of Scales that his mount changed his legs in running.