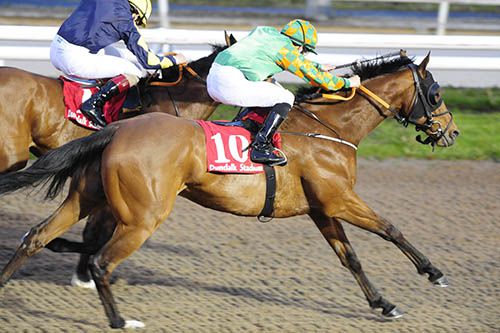 The County Kilkenny jockey remarked: "He was stuck a bit wide, but he actually enjoyed it and he picked up well."

For his part Joyce stated: "He's been unlucky but he stayed well and won nicely. He's been showing more pace recently. He's owned by Sean Dalton, an auctioneer in Longford. He'll go jumping and he jumps very well."

The Stewards received a report from Mr J.R. Banahan, Turf Club Starter, stating that the stalls malfunctioned prior to this race and didn't open when he attempted to start the race initially, and subsequently opened at the second attempt. He also reported that after the race started the stalls continued to malfunction when tested. Having considered the report, the Stewards took no further action having been assured by the Starter that the starting mechanism would be repaired in advance of the next meeting.

C.P. Hoban, rider of Raydari (FR), trained by Rodger Sweeney, reported to the Stewards' Secretaries that his mount banged his head off the stalls when they malfunctioned initially and subsequently dwelt and lost a lot of ground once the race started on the second attempt.

The Stewards interviewed J.M. Conneely, rider of Water Sprite, concerning his use of the whip in closing stages of this race. Evidence was heard from the rider concerned. Having viewed a recording of the race and considered the evidence the Stewards found J.M. Conneely in breach of Reg 10 3.(a) by using his whip in front of the saddle the forehand position and having taken his record into account the Stewards cautioned him regarding his future responsibilities in this regard.

The Stewards enquired into an incident on the opening turn involving Hume Lough (GB), ridden by C.D. Hayes, Annadiamond, ridden by W.M. Lordan, and That's Ours (USA), ridden by D. Fitzpatrick, where it appeared Annadiamond ran short of room and was forced to check. Evidence was heard from the riders concerned. Having viewed the recording of the race and considered the evidence, the Stewards found D. Fitzpatrick in breach of Rule 214 by riding carelessly and having taken his record into account suspended him for one race day.