Top goes back to back in Guinness Handicap Hurdle 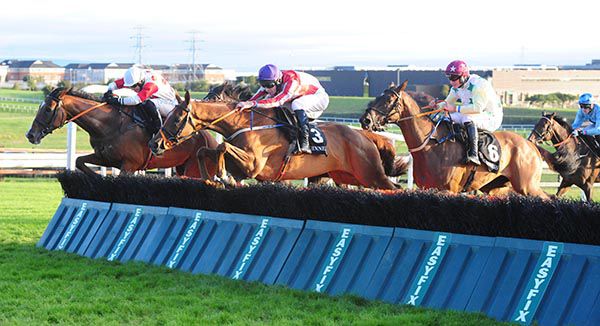 Top Othe Ra repeated his win in the concluding Guinness Handicap Hurdle from twelve months back to provide Tom and Helen Mullins with compensation having missed the cut for the big one yesterday.

A ten-year-old at this stage, the Whitmore's Conn gelding also won his bumper at Galway, back in 2013, when providing David Mullins with a second win in the plate.

He's won a lot of races since, including a Grand National, and here the owner and trainer's son got Top Othe Ra (9/2) home by a neck and three parts of a length from Stormey and On The Go Again (11/4 favourite).

Indeed this was an exciting nightcap all told as four and a quarter lengths separated the first six home.

"I was raging that he didn't get into the Galway Hurdle (third reserve)," said Tom Mullins.

"I'm thrilled to bits with this though and he's a great little horse.

"I wasn't even sure if it was this race he won or not last year (race switched from the start to the end of the card) — I knew he'd won at the festival alright.

"He ran nicely in Leopardstown (beating tonight's feature race winner, Nessun Dorma) so he had the form.

"He ran alright up to this then and we were saving him for the Galway Hurdle but this is great anyway."

The Stewards interviewed D.J. McInerney, rider of Dr Mikey, concerning his use of the whip in the latter stages of this race. Evidence was heard from the rider concerned. Having viewed a recording of the race and considered the evidence the Stewards found the rider in breach of Reg. 10. 3(f)(frequency) and having taken his record into account suspended the rider for one race day.

M.P. Walsh, rider of Bhutan trained by Joseph Patrick O'Brien, reported to the Clerk of Scales that his mount didn't feel right and pulled up.

Unbeaten American colt Nadal, one of the favourites for the Kentucky Derby, has been retired to stand as a stallion following a front leg fracture.