Torrens excels as Uisce Beatha begins with a win for Roche 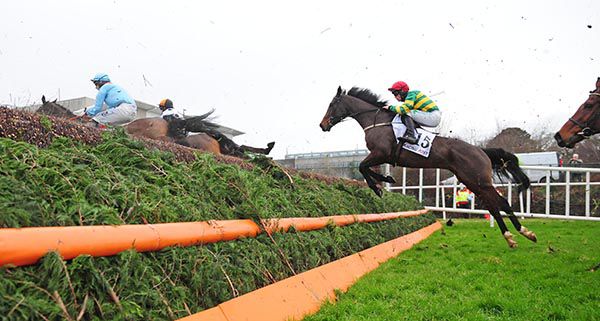 On his first outing for nearly a year and beginning for the Padraig Roche yard Uisce Beatha struck at 40/1 in the 'Bet Through The Free Racing Post App' Handicap Chase at Leopardstown.

Simon Torrens did the steering on Uisce Beatha and he came from off the pace to beat Grand Partner and Emily Moon by a length and three parts and a neck.

Jan Maat fell at the last when in with every chance whilst Popong was still chasing in behind when coming a cropper here too. At the same obstacle Crazywork De Vassy was badly hampered and unseated rider.

“He was working well at home and we thought he'd run a nice race,” said Roche.

“Simon gave him a great ride and I'd say he stays well looking at that, he came home well.

“He's a nice horse to have and I'm delighted. I have him since the summer when he came back from his break.

“It's great to get a winner here at Christmas.”

K.C. Sexton, rider of Or Jaune De Somoza (FR) trained by Gordon Elliott, reported to the Clerk of Scales that his saddle slipped on the approach to the final fence.

The Irish Horseracing Regulatory Board Veterinary Officer reported to the Stewards that Quamino (GER) trained by Paul Nolan was noted to have blood at the nostrils post race.