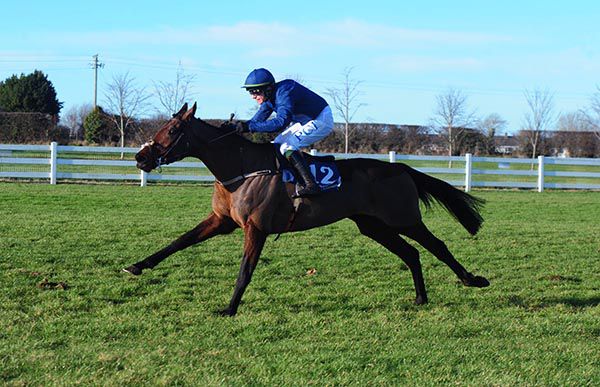 As the betting suggested she might Yukon Lil (4/7) obliterated her rivals in the Clinton Higgins Chartered Accountants Mares Maiden Hurdle at Naas.

Again with the hurdles in the straight out owing to the low-lying sun there was only four to be jumped all told in this two miler.

The eye was drawn to a couple of smooth-travellers as they approached the business end, Yukon Lil and Miss Aloud.

Many were likely wishing this 33/1 shot home, but predictably she couldn’t match strides with the classy bumper mare Yukon Lil, from the bypassed last.

Twelve lengths separated them at the line, with seven and a half lengths to second favourite Rhythm Devine in third.

“She always works well at home and she showed it there,” said successful jockey Paul Townend on the Sue Magnier-owned and Willie Mullins-trained Yukon Lil.

“She needs a bit of practice hurdling, we only jumped four there, and we'll get a bit more into her at home.

“I think she can be a good novice hurdle mare. She put that to bed very quickly and she couldn't have been any more impressive for me.

“With her jumping she just needs a bit of practice at it.”

A. McCurtin, rider of Dylan Rock trained by Sean O. O'Brien, reported to the Clerk of Scales that his mount was pulled up having got very tired.

The Stewards received a report from Nick Tarrant, IHRB Doping Control Officer that Alan King, rider, had failed to submit to a dope test having being notified both verbally and in writing in accordance with the provisions of R 7.

He confirmed that he had subsequently made contact with the rider who admitted to having long left the racecourse.

Having considered the report, the Stewards referred the matter to The Referrals Committee.