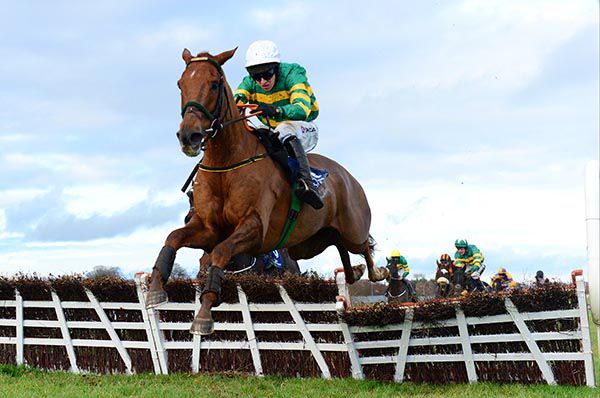 Mark Walsh is really taking Naas by storm in the J P McManus colours this afternoon and he landed the big Grade B Sky Sports Racing Launching In 2019 Brown Lad Handicap Hurdle on De Name Escapes Me.

Walsh finished second in the 1.40 on School Boy Hours, and runner-up thirty five minutes later too aboard Sir Bob.

However he was back in the number one again here, following on from Rhinestone (for Joseph O’Brien in the opener) and Espoir D’Allen (race three for Gavin Cromwell) - a 38/1 hat-trick.

Noel Meade trains De Name Escapes Me, one of four McManus representatives in the Brown Lad, and he kicked on from two out to beat Brex Drago by four and a quarter lengths.

There was a length and a half then to well-backed favourite Slippery Serpent (4/1 into 100/30) in third.

"I've always liked him but he's been a very disappointing horse. The horses are in great shape and everything went right for him. Mark was in the right place as they went slow and he was at the business end. He quickened up nicely," said Meade.

"He's been in great form at home. He's been chasing as well so it wouldn't be beyond the realms of possibility that he'd turn up in a chase next time. I don't think three miles would be a problem to him."