Whelan double to wrap up at Dundalk 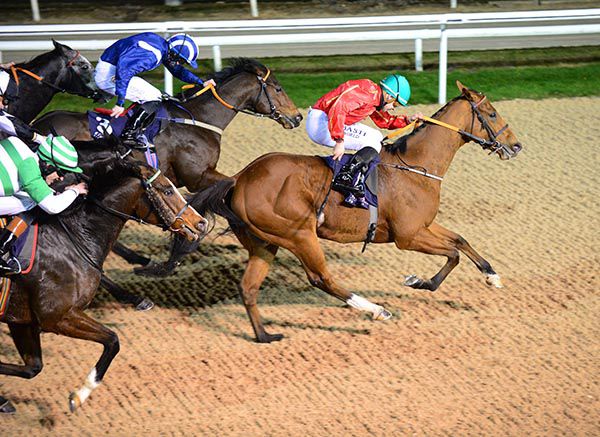 Ronan Whelan finished with a flourish at Dundalk this evening to ride the closing couple of winners on the card, topped off by Too Hard To Hold in the Follow Us On Twitter @DundalkStadium Handicap.

With a sixth, two thirds, and a second placing earlier for Whelan, he landed the penultimate contest on Noirvento for Tracey Collins, and here he donned the familiar Garrett Freyne silks on Too Hard To Hold for Jack Davison.

The Camacho three-year-old beat ‘finishers’ Kuwait Direction and Tommy Taylor by half a length and a short head.

Too Hard To Hold chased the leaders, and he was pushed along in fifth two furlongs out.

Soon ridden, the Davison representative made progress to lead under a furlong out, staying on well inside the final furlong to score.

“He has really learned how to race properly,” said Davison.

“He didn't jump as quick as he usually does but it actually worked out to be a good thing as he can be a touch keen in his races.

“Today he jumped, did things properly, went through the race and finished it off well, hitting the line strong.

“I think a strongly run six is what he wants.”

W.T. Byrne, rider of Illetas trained by Anthony Mullins, reported to the Clerk of Scales that his mount was tightened for room after leaving the starting stalls.

J.M. Sheridan, rider of Kuwait Direction trained by James McAuley, reported to the Clerk of Scales that his mount ducked left on leaving the starting stalls.

D.P. McDonogh, rider of Fridtjof Nansen (GB) trained by Kieran P. Cotter, reported to the Clerk of Scales that his mount was hampered after leaving the starting stalls.

G.M. Ryan, rider of That's Mad (GB) trained by Leanne Breen, reported to the Clerk of Scales that his mount clipped heels soon after leaving the starting stalls.

S. Foley, rider of Aloysius Lilius trained by Gerard O'Leary, reported to the Clerk of Scales that his mount hung right during this race.

The Stewards interviewed O.J. Orr, rider of Shawaf (GB), concerning the fact that he appeared to move across before reaching the marker poles. Having viewed the recording of the race and considered evidence from the rider, the Stewards were of the opinion that O.J. Orr was in breach of Rule 211(a) by failing to ride in a straight line from his draw position until reaching the marker poles. Having taken his previous record into consideration, the Stewards cautioned O.J. Orr on this occasion.

The Stewards reviewed incidents shortly after leaving stalls involving Illetas, ridden by W.T. Byrne, Kuwait Direction, ridden by J.M. Sheridan, Fridtjof Nansen (GB), ridden by D.P. McDonogh, That's Mad (GB), ridden by G.M. Ryan and Bluepower ridden by C.D. Hayes, where it appeared a number of horses got tight for room. Having viewed the recording of the race, the Stewards decided that no further action was warranted.